This the second in a series of three posts, and continues directly from part 1.

There are many theories of why the UK’s productivity growth has stalled, and in the absence of proper analysis it’s all too easy to chose a favoured hypothesis on the basis of anecdotes or a single data point, picked out to fit one’s ideological predilections. Indeed, I could be accused of doing just that, by drawing attention the UK’s weak R&D record; others might immediately start looking at a lack of competitiveness in the economy, or insufficient deregulation, as the root of the issue. But it would be surprising if such a striking occurrence had just a single cause, so a more careful analysis should help us not just by ruling possible causes in or out, but by ascribing different weights to multiple causes.

As I discussed in an my earlier post on the productivity crisis, growth economics conventionally considers economic growth to arrive from some combination of more labour – simply working more hours; more capital expenditure – buying more machines to do the work; and learning how to do things better. It is this collective learning how to extract more value from the same amount of input of labour and capital that growth economists call “innovation” and measure in a quantity called “total factor productivity” – TFP.

One explanation for a fall in productivity could be a shift in the balance between labour and capital. We normally expect, as the economy grows, for processes to be increasingly automated, so rather than having men with shovels dig ditches we buy more mechanical diggers – this process is called capital deepening. We can imagine the opposite happening – if wages fell, and labour were to become cheap compared to capital, then it might not be worth the expense to buy more machines. For example, there seem to be more hand car washes now than there used to be. Maybe this is because some motorists have a morbid fear of going through the mechanical car wash in their local garage, so they’ll pay a premium price for an artisanal hand wash. But maybe the people doing the washing are desperate for a job and will wash cars for wages that make the capital expense of a machine uneconomic. That would be an example of capital shallowing.

A detailed analysis of recent productivity performance, that decomposes these different factors, has been carried out by Goodridge, Haskel and Wallis (Accounting for the UK productivity puzzle: a decomposition and predictions). This seems to dispose of some popular theories for recent productivity weakness; evidence for capital shallowing, if any, seems weak, while shifts in the sectoral balance of the economy actually seem to have been working to increase productivity rather than decrease it.

Two ongoing headwinds for UK productivity – the decline of North Sea Oil, and the end of the banking bubble

The importance of the decline of North Sea Oil and Gas shouldn’t be a surprise to anyone. Offshore oil and gas production ramped up in the 1980’s and 1990’s, making the UK a significant world producer. As the plot below shows, oil production peaked in 1999, and gas one year later in 2000. Since then, there has been a steep decline in production, which is projected to continue more gently into the foreseeable future (this trajectory will be strongly influenced by oil prices, and is likely to be steeper the longer low oil prices persist).

Indirect effects are more difficult to identify, but it’s plausible to argue that North Sea Oil contributed to what economists call “Dutch Disease”, in which the oil effect leads to a high value of the currency, making other tradable sectors. such as manufacturing, less competitive. 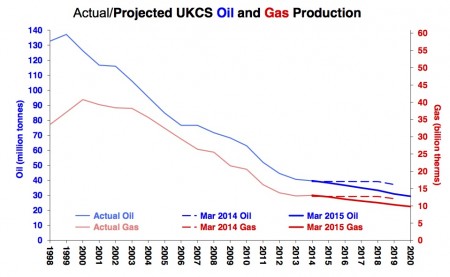 Actual and projected production of Oil and Gas in the UK Continental Shelf, according to DECC’s latest Oil and Gas Projections

My next plot shows labour productivity in the finance and insurance sector. Just as North Sea Oil was peaking, in 2000, productivity in finance industry went into a new phase of fast growth. This growth slowed in 2006, went into a post-crisis reverse in 2009, and is still declining. Of course, what is meant by output in the finance sector is less clear than it is for oil and gas, where one can measure the barrels that come out of the ground.

What the financial crisis revealed was that some of the profits taken before the crisis represented the upside from excessive risk-taking, and when those gambles turned sour the tax-payer took on the losses. In effect, pre-crisis profits were overstated because the banks were benefitting from an implicit insurance against failure, whose premiums were being paid by the state. There are different estimates of the value of this state subsidy, reviewed in this Bank of England paper (The Implicit Subsidy of Banks, Noss and Sowerbuts), but even conservative estimates amount to £10’s of billions.

Our previous dependence on the financial sector also is likely to have had damaging indirect effects on our long-term economic growth prospects, as discussed in a recent Bank of International Settlements working paper (Why does financial sector growth crowd out real economic growth? by Stephen G Cecchetti and Enisse Kharroubi). I discussed the role of excessive financialisation in suppressing private sector investment in research and development in my earlier paper (The UK’s innovation deficit and how to repair it). 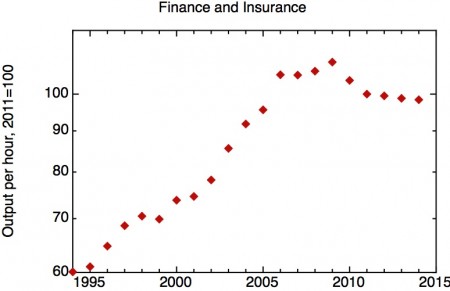 Over the past few decades, the UK’s economic prosperity has relied on North Sea Oil and the rapid growth of the financial services industry. Both have proved to be unsustainable; in the years to come we will have to find other sources of growth. To restore the economy’s productivity growth to levels we have come to expect, we aren’t just going to have to restore productivity growth in the other sectors of the economy to pre-crisis levels; we will have to increase it yet further to compensate for the continuing drag from oil and gas and financial services.