I have a much shorter version of my earlier three-part series (PDF version here) on the connection between the UK’s weak and worsening R&D performance and its current productivity standstill on HEFCE’s blog: Innovation, research and the UK’s productivity crisis.

The same piece has also been published on the blog of the Sheffield Political Economy Research Institute: Continuing on our current path of stagnating productivity and stagnating innovation isn’t inevitable: it’s a political choice, and it also appears on the web-based economics magazine Pieria.

The longer and more detailed post also formed the basis for my written evidence to the House of Commons Business Innovation and Skills Select Committee, which is currently inquiring into the productivity problem: On productivity and the government’s productivity plan (PDF).

Finally, here’s another graphical representation of the productivity problem in historical context, using the latest version of the Bank of England’s historical dataset “Three centuries of macroeconomic data”. It shows the total growth in hourly labour productivity over the preceding seven years; on this measure the current productivity slow-down is worse than that associated with two world wars and a great depression. 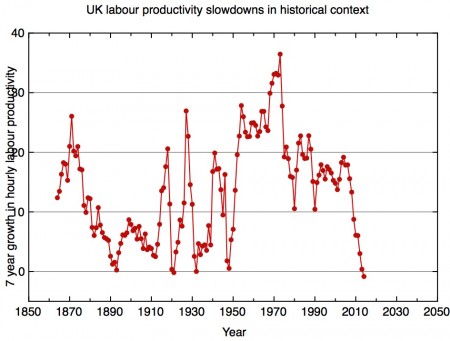 2 thoughts on “Innovation, research and the UK’s productivity crisis (the shorter version)”