Perhaps no single number is more important to the world economy than the price of oil. Modern economies depend on energy, and oil remains our largest energy source, supplying 31% of the world’s energy needs (another 21% comes from gas, whose price now moves quite closely with oil). And yet, huge movements in this number seemingly take experts by complete surprise. 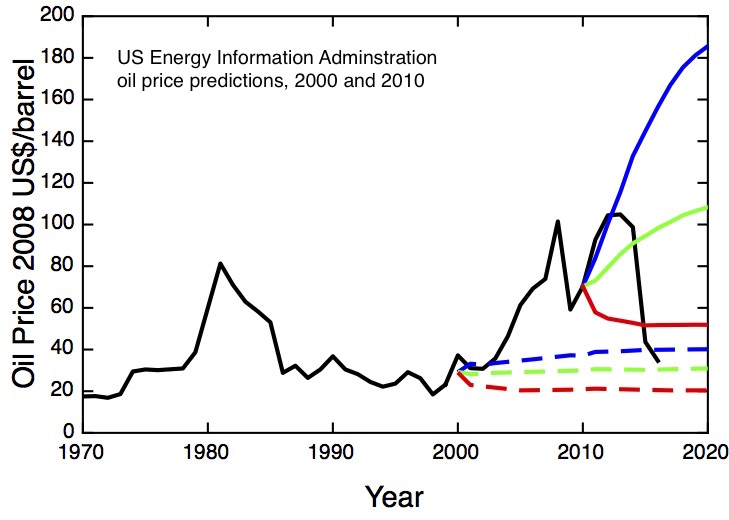 The price of oil in constant 2008 dollars, compared with the US Energy Information Authority predictions from 2000 and 2010. Data from the EIA.

My graph shows how the price of oil, corrected for inflation, has changed in the last 45 years. This is an updated version of the plot I blogged about five years ago; I included the set of predictions that the US Energy Information Administration had made in 2000. Just a few years later, these predictions were made nugatory by a large, unanticipated rise in oil prices. The predictions the EIA made ten years later, in 2010, had learnt one lesson – they included a much bigger spread between the high and low contingencies, amounting to more than a factor of three by the end of the decade. Now, only halfway into the period of the prediction, we see that the way oil prices turned out has so far managed both to exceed the high prediction and to undershoot the low one.

These gyrations mean that views that were conventional wisdom just a couple of years ago have to be rethought.

Advancing technology is less likely to be used to increase energy efficiency – new cars will on average get heavier and more powerful rather than more fuel efficient. The cost disadvantages of renewable energy technologies will become even more pronounced, at exactly the time when governments are becoming less inclined to subsidise them. But the imperative to develop and exploit high-cost sources of hydrocarbons – from tar sands, from deepwater, from the Arctic – has disappeared. To take a parochial UK centred view, the idea that the UK will develop a large scale shale gas industry – as fervently desired by our government, as feared by environmentalists – we can just forget about. Shale gas and tight oil is now losing money for most US producers, so in the UK, with its much higher costs and greater complexity of operation, it is just not going to happen anytime in the next few years.

Of course, having seen one gyration that nobody predicted, one shouldn’t rule out seeing another lurch in the other direction. In today’s uncertain world, it isn’t difficult to dream up the kinds of events that would constitute big enough demand or supply shocks to send the oil price lurching off in the other direction – and indeed, some of them might well be prompted by the current low price of oil (regime change in Saudi Arabia?)

We still maintain the fiction that our energy policy is (and should be) driven by the market, and that market prices embody all the information we need (and indeed all the information it is possible to have) to make the right decisions about our energy supply. This is, of course, despite the huge and unpriced externalities our dependence on fossil fuels leads to, in the form of climate change. And yet, the main message of the last few years of oil prices seems to be that nobody knows anything.