To quote my interviewer, Nikola Danaylov, “During our 75 min discussion with Prof. Richard Jones we cover a variety of interesting topics such as: his general work in nanotechnology, his book and blog on the topic; whether technological progress is accelerating or not; transhumanism, Ray Kurzweil and technological determinism; physics, Platonism and Frank J. Tipler‘s claim that “the singularity is inevitable”; the strange ideological routes of transhumanism; Eric Drexler’s vision of nanotechnology as reducing the material world to software; the over-representation of physicists on both sides of the transhumanism and AI debate; mind uploading and the importance of molecules as the most fundamental units of biological processing; Aubrey de Grey‘s quest for indefinite life extension; the importance of ethics and politics…”

For an earlier round-up of other reactions to the e-book, see here.

An interview between me and the writer Eddie Germino has just been published on the transhumanist website/magazine H+, with the title Going Soft on Nanotech. In it I discuss what I mean by “Soft Machines”, and make some comments on the feasibility of some of Drexler’s proposals for radical nanotechnology. I also make some more general points about how I see the future of technology, and say something about the Transhumanist and Singularitarian movements.

A couple of weeks ago I was interviewed for the Robots podcast special on on 50 years of robotics, and predictions for the next half century. My brief was nanorobots, and you can hear the podcast here. My pitch was that on the nanoscale we’d be looking to nature for inspiration, exploiting design principles such as self-assembly and macromolecular shape change; as a particularly exciting current development I singled out progress in DNA nanotechnology, and in particular the possibility of using this to do molecular logic. As it happens, last week’s edition of Nature included two very interesting papers reporting further developments in this area – Molecular robots guided by prescriptive landscapes from Erik Winfree’s group in Caltech, and A proximity-based programmable DNA nanoscale assembly line from Ned Seeman’s group in NYU.

The context and significance of these advances is well described in a News and Views article (full text); the references to nanorobots and nanoscale assembly lines have led to considerable publicity. James Hayton (who reads the Daily Mail so the rest of us don’t have to), in his 10e-9 blog comments very pertinently on the misleading use of classical nanobot imagery to illustrate this story. The Daily Mail isn’t the only culprit here – even the venerable Nature uses a still from the film Fantastic Voyage to illustrate their story, with the caption “although such machines are still a fantasy, molecular ‘robots’ made of DNA are under development.”

What’s wrong with these illustrations is that they are graphic representations of bad metaphors. DNA nanotechnology falls squarely in the soft nanotechnology paradigm – it depends on the weak interactions by which complementary sequences are recognised to enable the self-assembly of structures whose design is coded within the component molecules themselves, and macromolecular shape changes under the influence of Brownian motion to effect motion. Soft machines aren’t mechanical engineering shrunk, as I’ve written about at length on this blog and elsewhere.

But there’s another, more subtle point here. Our classical conception of a robot is something with sensors feeding information into a central computer, which responds to this sensory input by a computation, which is then effected by the communication of commands to the actuators that drive the robot’s actions. This separation of the “thinking” function of the robot from its sensing and action is something that we find very appealing; we are irresistibly drawn to the analogy with the way we have come to think about human beings since Descartes – as machines animated by an intelligence largely separate from our bodies.

What is striking about these rudimentary DNA robots is that what “intelligence” they possess – their capacity to sense the environment and process this information to determine which of a limited set of outcomes will be effected – arises from the molecules from which the robot is made and their interaction with a (specially designed) environment. There’s no sense in which the robot’s “program” is loaded into it; the program is implicit in the construction of the robot and its interaction with the environment. In this robot, “thought” and “action” are inseparable; the same molecules both store and process information and drive its motion.

In this, these proto-robots operate on similar general principles to bacteria, whose considerable information processing power arises from the interaction of many individual molecules with each other and with their physical environment (as beautifully described in Dennis Bray’s book Wetware: a computer in every living cell). Is this the only way to build a nanobot with the capacity to process and act on information about the environment? I’m not sure, but for the moment it seems to be the direction we’re moving in.

I’m making a brief visit to Virginia to talk to high school students and others about my book, Soft Machines. It’s in connection with a visiting author program for the Chesterfield County school system, initiated by Prof Krishan Aggarwal, from Virginia State University; each year high school students in the County schools get to read a science book in class and the author comes to discuss it with them. So far I’ve talked to students in Monacan High School and L.C. Bird High School, as well as spending an afternoon with the staff of Richmond’s MathScience Innovation Centre and local science teachers, who have been developing sets of lesson materials about nanotechnology for high school students, and have clearly been thinking hard about how to convey some of the developing concepts of nanotechnology to their students. I’m just about to go back to L.C. Bird High School for a public lecture and panel discussion. I’ve been hugely impressed so far by the thought that’s gone into the questions being put to me; it’s been a pleasure to interact with such an engaged group of students. My thanks to Krishan and to Dr Jeremy Lloyd, from the Chesterfield County schools, for setting this up and looking after me.

A forthcoming conference in London will be discussing the “soft” approach to nanotechnology. The meeting – Faraday Discussion 143 – Soft Nanotechnology – is organised by the UK’s Royal Society of Chemistry, and follows a rather unusual format. Selected participants in the meeting submit a full research paper, which is peer reviewed and circulated, before the meeting, to all the attendees. The meeting itself concentrates on a detailed discussion of the papers, rather than a simple presentation of the results.

The organisers describe the scope of the meeting in these terms: “Soft nanotechnology aims to build on our knowledge of biological systems, which are the ultimate example of ‘soft machines’, by:

The meeting is not until this time next year, in London, but if you want to present a paper you need to get an abstract in by the 11 July. Faraday Discussions in the past have featured lively discussions, to say the least; it’s a format that’s tailor made for allowing controversies to be aired and strong positions to be taken.

Tomorrow I’m giving a public lecture in the Garrick Theatre, Lichfield, under the auspices of the Lichfield Science and Engineering Society. Non-members are welcome.

Lichfield is a small city in the English Midlands; it’s of ancient foundation, but in recent times has been eclipsed by the neighbouring industrial centres of Birmingham and the Black Country. Nonetheless, it should occupy at least an interesting footnote in the history of science and technology. It was the home of Erasmus Darwin, who deserves to be known for more than simply being the grandfather of Charles Darwin. Erasmus Darwin (1731 – 1802) was a doctor and polymath; his own original contributions to science were relatively slight, though his views on evolution prefigured in some ways those of his grandson. But he was at the centre of a remarkable circle of scientists, technologists and industrialists, the Lunar Society, who between them laid many of the foundations of modernity. Their members included the chemist, Joseph Priestly, discoverer of oxygen, Josiah Wedgwood, whose ceramics factory developed many technical innovations, and Matthew Boulton and James Watt, who between them take much of the credit for the widespread industrial use of efficient steam power. In attitude they were non-conformist in religion – Priestley was a devout Unitarian, who combined thoroughgoing materialism with a conviction that the millennium was not far away, but Erasmus Darwin verged close to atheism. Their politics was radical – dangerously so, at a time when the example of the American and French revolutions led to a climate of fear and repression in England.

The painting depicts another travelling science lecturer demonstrating the new technology of the air pump to a society audience in the English Midlands. The painter, Joseph Wright, from Derby, was a friend of Erasmus Darwin, and the full moon visible through the window is probably a reference to the Lunar Society, many of whose members Wright was well acquainted with. Aside from its technical brilliance the painting captures both the conviction of some in those enlightenment times that public experimental demonstrations would provide a basis of agreed truth at a time of political and religious turbulence, and, perhaps, a suggestion that this knowledge was after all not without moral ambiguity. 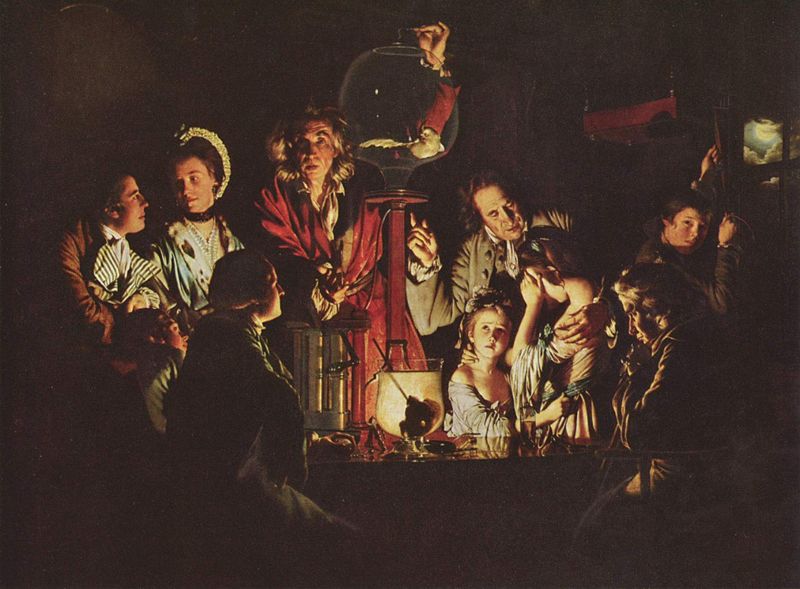 An experiment on a bird in an air pump, by Joseph Wright, 1768. The original is in the National Gallery.