Today’s picture is a scanning electron micrograph of a hybrid structure in which organic light emitters are confined in a micropillar by a pair of inorganic multilayer mirrors. These hybrid organic/inorganic structures have interesting photonic properties that may have applications in quantum cryptography and quantum computing; this work comes from my colleagues in the physics department here at Sheffield in collaboration with some of our electrical engineers. 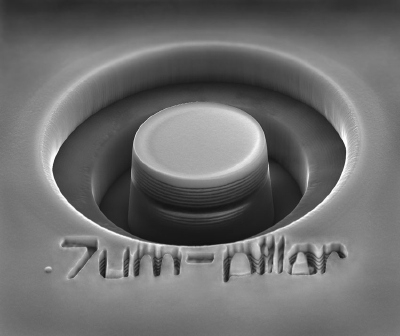 This structure is made by laying down, by chemical vapour deposition, 12 pairs of alternate layers of silicon oxide and silicon nitride, each exactly one quarter of a light wavelength in thickness. This is coated by a 240 nm (half a wavelength) thick layer of the polymer polystyrene, doped with an organic dye called Lumogen red, which in turn is coated by another 12 pairs of layers, this time of tellurium oxide and lithium fluoride, thermally evaporated. The pillar is carved out of the resulting layer cake structure by using a focused ion beam.

The multilayers act as perfect mirrors. Imagine putting a light source in between two parallel mirrors – you’d get an infinite (if the mirrors are perfect) series of reflections of the light. In our situation the dye molecule is the light source; when it emits a single photon, that photon is going to interfere with its ghostly counterparts emitted from the reflections, which are all in phase with each other. This makes it a very efficient producer of single photons – potentially these could be used for quantum cryptography or quantum computing.

All of this has already been demonstrated using quantum dots – tiny particles of inorganic semiconductor – as the light emitter. What’s the advantage of using an organic dye instead? In these devices, photons are emitted when an electron and a hole annihilate. These electron-hole pairs – called excitons – are very weakly bound in ordinary semiconductors, which means that these devices only work at rather low temperatures, about 50 K. In organic molecules the charges distort the structure of the molecule itself, which means that the exciton is bound much more strongly and the device will work at room temperature. It goes without saying that this feature makes the possibility of an economically viable quantum computer seem much closer. To be fair, though, the organic materials have disadvantages, too – they are susceptible to being bleached by bright light.

The work is a collaboration between my colleagues in physics, Ali Adawi, Ashley Cadby, Daniele Sanvitto, Liam Connolly and Richard Dean, who are postdocs and grad students in the groups of David Lidzey, Mark Fox, and Maurice Skolnick. Device fabrication was done with the help of Wen-Chang Hung and Abbes Tahraoui, in Tony Cullis’s group in our Electronic and Electrical Engineering Department. It’s reported in the current edition of Advanced Materials here (subscription required).