I had a rather difficult and snowy journey to London yesterday to give evidence to the House of Commons Business, Energy and Industrial Select Committee (video here, from 11.10). The subject was Industrial Strategy, and I was there as a member of the Industrial Strategy Commission, whose final report was published last November.

One of the questions I was asked was about the government’s new target of achieving an overall R&D intensity of 2.4% of GDP by 2027, as set out in its recent Industrial Strategy White Paper. Given that our starting point is about 1.7%, where it has been stuck for many years, was this target achievable? I replied a little non-committally. I’d reminded the committee about the long term fall in the UK’s R&D intensity since 1980, and the failure of what I’ve called “supply side innovation policy”, as I discussed at length in my paper The UK’s innovation deficit and how to repair it, which also highlights earlier governments’ failure to meet similar targets in the past. But it’s worth looking in more detail at the scale of the ambition here. My plot shows actual R&D spending up to 2015, and then the growth that would be required to achieve a 2.4% target. 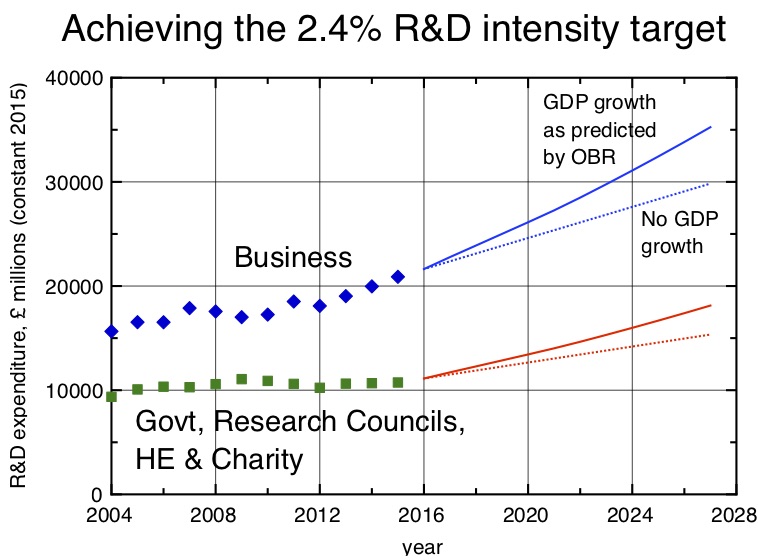 R&D expenditure in the UK, adjusted for inflation. Data points show actual expenditure up to 2015 (source: ONS GERD statistics, March 2017 release), the lines are the projections of the growth that would be required to meet a target of 2.4% by 2027. Solid lines assume that GDP grows according to the latest predictions of the Office of Budgetary Responsibility up to 2022, and then at 1.6% pa thereafter. Dotted lines assume no growth in GDP at all.

One obvious point (and drawback) about expressing the target as a percentage of GDP is the worse the economy does, the less demanding the target is. I’ve taken account of this effect by modelling two scenarios. In the first one, I’ve assumed the rates of growth predicted out to 2022 by the Office of Budgetary Responsibility in their latest forecasts. These are not particularly optimistic, predicting annual growth rates in the range 1.3% – 1.8%; after 2022 I’ve assumed a constant growth rate of 1.6%, their final forecast value. In the second, I’ve assumed no growth in GDP at all. One hopes that this is a lower bound. In both cases, I’ve assumed that the overall balance between public and private sector funding for R&D remains the same.

Some of this spending is directly controlled by the government. My plot splits the spending by where the research is carried out – in 2015, research in government and research council laboratories and in the universities amounted to one third of the total – £10.7 billion. This would need to increase by £7.4 billion.

As the plot shows, the government’s part of R&D has been essentially flat since 2004. The government has announced in the Autumn budget R&D increases amounting to £2.3 billion by 2021-2022. This is significant, but not enough – it would need to be more like £3.5 billion to meet the trajectory to the target. There is of course an issue about whether the research capacity of the UK is sufficient to absorb sums of this magnitude, and indeed whether we have the ability to make sensible choices about spending it.

But most of the spending is not in the control of the government – it happens in businesses. This needs to rise by about £14 billion, from £21 billion to £35 billion.

How could that happen? Graham Reid has set this out in an excellent article. There are essentially three options: existing businesses could increase their R&D, entirely new R&D intensive businesses could be created, and overseas companies could be persuaded to locate R&D facilities in the UK.

How can the government influence these decisions? One way is through direct subsidy, and it is perhaps not widely enough appreciated how much the government already does this. The R&D tax credit is essentially an indiscriminate subsidy for private sector R&D, whose value currently amounts to £2.9 billion. Importantly, this does not form part of the science budget. More targeted subsidies for private sector R&D come through collaborative research sponsored through InnovateUK (and, for the moment at least, the EU’s Framework Programme). In addition, private sector R&D can be supported indirectly through the provision of translational R&D centres whose costs are shared between government and industry, like Germany’s Fraunhofer Institutes. The UK’s Catapult Centres are an attempt to fill this gap, though on a scale that is as yet much too small.

Business R&D did slowly increase in real terms between 2004 and 2015. It is important to realise, though, that these gradual shifts in the aggregate figure conceal some quite big swings at a sector level.

This is illustrated in my second plot, showing inflation corrected business R&D spend from selected sectors. This shows the dramatic fall in pharmaceutical R&D – more than £1 billion, or 22% – from its 2011 peak, and the even more dramatic increase in automotive R&D – £2.5 billion, or 274%, from its 2006 low point. We need to understand what’s behind these swings in order to design policy to support R&D in each sector.

So, is the 2.4% target achievable? Possibly, and it’s certainly worth trying. But I don’t think we know how to do it now. The challenge to industrial strategy and science and innovation policy is to change that.