This is a slightly adapted extract from The Biomedical Bubble: Why UK research and innovation needs a greater diversity of priorities, politics, places and people, my report for NESTA, with James Wilsdon.

Productivity is a measure of the efficiency with which inputs are converted into outputs of value – increasing productivity lets us get more from less. We talk about different kinds of productivity in our report:

The performance of the whole national economy is measured by labour productivity – the value of the goods and services (as measured by GDP) produced by an (average) hour of work. Increases in labour productivity arise from a combination of capital investment and technological progress, and are the fundamental drivers of economic growth and increasing living standards. 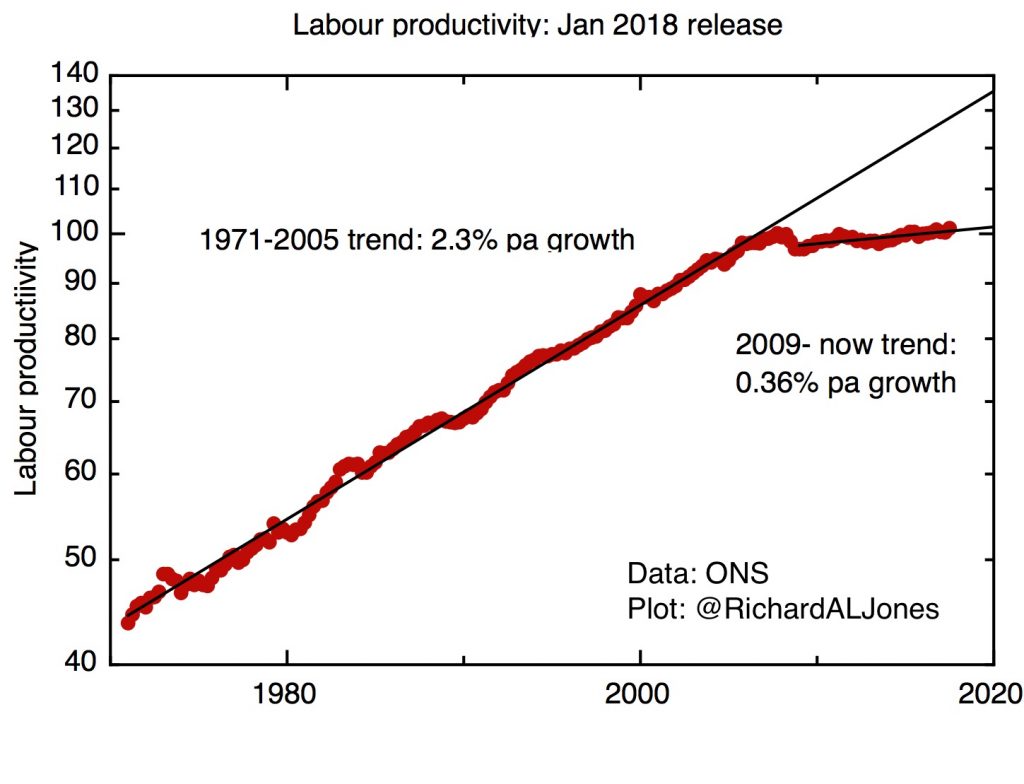 Labour productivity in the UK has stagnated since the global financial crisis of 2007/8 : currently it’s some 15-20% below what would be expected if the pre-crisis trend had continued, the worst performance for at least a century . It’s this stagnation of labour productivity that sets our overall economic environment, leading directly to wage stagnation and a persistently challenging fiscal situation for the government, which has responded with sustained austerity.

The overall labour productivity of the economy is an aggregate; we can decompose it to consider the contribution of different geographical regions or industry sectors. A regional breakdown reveals how geographically unbalanced the UK economy is. London dominates, with labour productivity 33% above the UK average. Of the other regions, only the South East is above the national average. Wales and Northern Ireland are 17% below the UK average, with other regions in the English North and Midlands between 7 and 15% below average.

Labour productivity gains arise from the introduction of new, high value, products and improved processes. In the pharmaceutical industry, new products are created by research and development (R&D), with their value being protected by patents.

R&D productivity expresses the efficiency with which R&D produces value through new products and processes. This can be difficult to quantify: a new drug is the product of perhaps 15 years of R&D and for each successful drug produced many candidates fail. One simple measure is the number of new drugs produced for a given value of R&D as the graph shows, on this measure R&D productivity has fallen substantially over the decades. 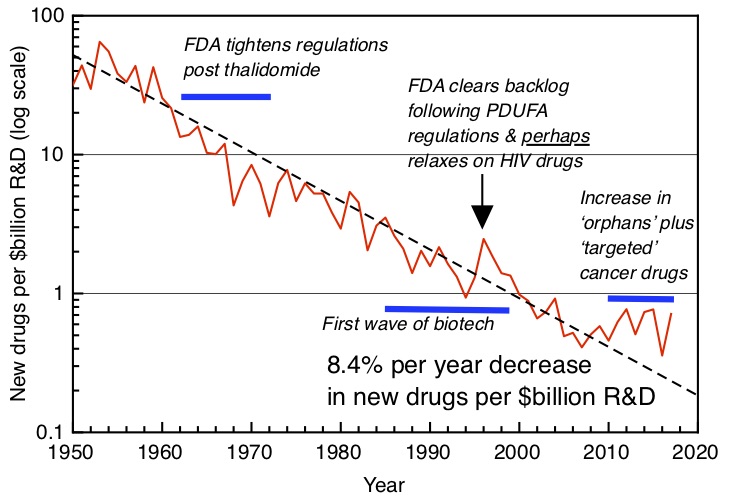 Falling R&D productivity explains falling labour productivity in pharmaceuticals, with a lag time that expresses the time it takes to develop and test new drugs. This will be exacerbated if the total volume of R&D falls as well, as it has begun to do in recent years.

The recent weak performance of the UK economy can be linked in part to its low overall R&D intensity , and this has been recognised by the government’s commitment to raise this to 2.4% of GDP. As I described in an earlier post – Making UK Research and Innovation work for the whole UK – R&D intensity varies strongly across the country, with these variations being correlated with regional economic performance. The commitment to raise the overall R&D intensity of the UK economy is welcome, but it will only deliver the hoped-for economic benefits if overall R&D productivity across all sectors can be maintained or increased.

Healthcare productivity – the pressure for improvements

The purpose of health-related research and development is not simply economic, however. We hope that research will improve people’s lives, reducing mortality and morbidity.

But we can’t avoid the economic dimension of healthcare either – the pressures on health service budgets are all too obvious in this time of continuing public austerity, so the idea that innovation – technological, social and organisational – can allow us to achieve the same or better healthcare outcomes for less money is compelling.

Healthcare productivity can be estimated by comparing inputs – labour, goods and services and capital expenditure – with some measure of the amount of treatment delivered. This needs to be adjusted for improved quality of care – for example, from improved survival rates, and measures of patient satisfaction. The ONS produces estimates of quality adjusted public service healthcare productivity , which show an average increase of 0.8% a year, between 1995 – 2015.

The context for this continuous improvement in healthcare productivity is an even larger increase in demand for healthcare . For example, between 2003/4 and 2015/16 there was an average annual rise in hospital admissions a year, driven by demographic changes – in particular – a 40% rise in the number of people aged 85 and over.

This demand pressure is likely to continue into the future, so without further increases in healthcare productivity, quality will suffer and costs will rise.

How can we break out of this trap? Improving the effectiveness and targeting of our R&D effort has to be central to this. Better R&D productivity will lead to improvements in labour productivity in pharmaceuticals, biotechnology and medical technology across the whole country, leading to sustained, geographically balanced economic growth. And if we do the right R&D to deliver improved healthcare productivity, that will lead to better health outcomes for everyone.