Fifteen years ago it was possible to be optimistic about the world’s capacity to avert the worst effects of climate change. The transition to low carbon energy was clearly going to be challenging and it probably wasn’t going to be fast enough. But it did seem to be going with the grain of the evolution of the world’s energy economy, in this sense: oil prices seemed to be on an upward trajectory, squeezed between the increasingly constrained supplies predicted by “peak oil” theories, and the seemingly endless demand driven by fast developing countries like China and India. If fossil fuels were on a one-way upward trajectory in price and availability, then renewable energy would inevitably take its place – subsidies might bring forward their deployment, but the ultimate destination of a decarbonised energy system was assured.

The picture looks very different today. Oil prices collapsed in the wake of the global financial crisis, and after a short recovery have now fallen below the most pessimistic predictions of a decade ago. This is illustrated in my plot, which shows the long-term evolution of real oil prices. As Vaclav Smil has frequently stressed, long range forecasting of energy trends is a mugs game, and this is well-illustrated in my plot, which shows successive decadal predictions of oil prices by the USA’s Energy Information Agency. 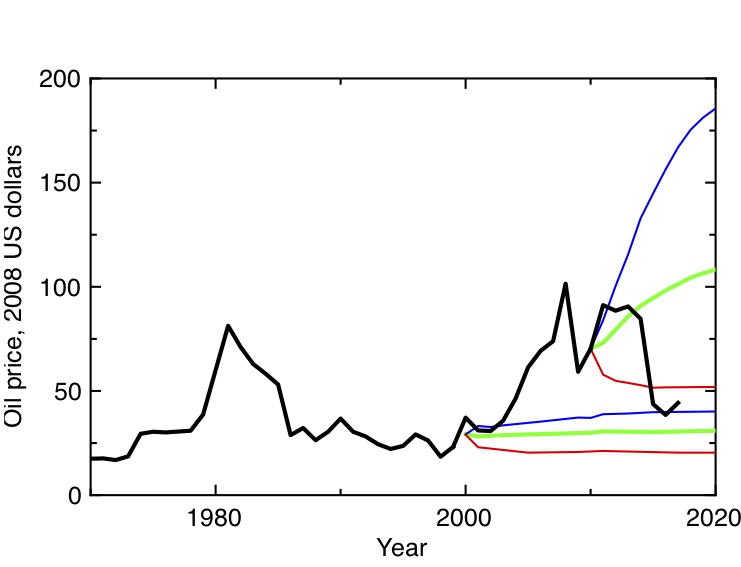 Successive predictions for future oil prices made by the USA’s EIA in 2000 and 2010, compared to the actual outcome up to 2016.

What underlies this fall in oil prices? On the demand side, this partly reflects slower global economic growth than expected. But the biggest factor has been a shock on the supply side – the technological revolution behind fracking and the large-scale exploitation of tight oil, which has pushed the USA ahead of Saudi Arabia as the world’s largest producer of oil. The natural gas supply situation has been transformed, too, through a combination of fracking in the USA and the development of a long-distance market in LNG from giant reservoirs in places like Qatar and Iran. Since 1997, world gas consumption has increased by 25% – but the size of proven reserves has increased by 50%. The uncomfortable truth is that we live in a world awash with cheap hydrocarbons. As things now stand, economics will not drive a transition to low carbon energy.

A transition to low carbon energy will, as things currently stand, cost money. Economist Jean Pisani-Ferry puts this very clearly in a recent article – “let’s be clear: the green transition will not be a free lunch … we’ll be putting a price on something that previously we’ve enjoyed for free”. Of course, this reflects failings of the market economy that economics already understands. If we heat our houses by burning cheap natural gas rather than installing an expensive ground-source heat pump and running that off electricity from offshore wind, we get the benefit of saving money, but we impose the costs of the climate change we contribute to on someone else entirely (perhaps the Bangladesh delta dweller whose village gets flooded). And if we are moved to pay out for the low-carbon option, the sense of satisfaction our ethical superiority over our gas-guzzling neighbours gives us might be tempered by resentment of their greater disposable income.

The problems of uncosted externalities and free riders are well known to economists. But just because the problems are understood, it doesn’t mean they have easy solutions. The economist’s favoured remedy is a carbon tax, which puts a price on the previously uncosted deleterious effects of carbon emissions on the climate, but leaves the question of how best to mitigate the emissions to the market. It’s an elegant and attractive solution, but it suffers from two big problems.

The first is that, while it’s easy to state that emitting carbon imposes costs on the rest of the world, it’s very difficult to quantify what those costs are. The effects of climate change are uncertain, and are spread far into the future. We can run a model which will give us a best estimate of what those costs might be, but how much weight should we give to tail risk – the possibility that climate change leads to less likely, but truly catastrophic outcomes? What discount rate – if any – should we use, to account for the fact that we value things now more than things in the future?

The second is that we don’t have a world authority than can impose a single tax uniformly. Carbon emissions are a global problem, but taxes will be imposed by individual nations, and given the huge and inescapable uncertainty about what the fair level of a carbon tax would be, it’s inevitable than countries will impose carbon taxes at the low end of the range, so they don’t disadvantage their own industries and their own consumers. This will lead to big distortions of global trade, as countries attempt to combat “carbon leakage”, where goods made in countries with lower carbon taxes undercut goods which more fairly price the carbon emitted in their production.

The biggest problems, though, will be political. We’ve already seen, in the “Gilets Jaune” protests in France, how raising fuel prices can be a spark for disruptive political protest. Populist, authoritarian movements like those led by Trump in the USA are associated with enthusiasm for fossil fuels like coal and oil and a downplaying or denial of the reality of the link between climate change and carbon emissions. To state the obvious, there are very rich and powerful entities that benefit enormously from the continued production and consumption of fossil fuels, whether those are nations, like Saudi Arabia, Australia, the USA and Russia, or companies like ExxonMobil, Rosneft and Saudi Aramco (the latter two, as state owned enterprises, blurring the line between the nations and the companies).

These entities, and those (many) individuals who benefit from them, are the enemies of climate action, and oppose, from a very powerful position of incumbency, actions that lesson our dependence on fossil fuels. How do these groups square this position with the consensus that climate change driven by carbon emissions is serious and imminent? Here, again, I think the situation has changed since 10 or 15 years or so ago. Then, I think many climate sceptics did genuinely believe that anthropogenic climate change was unimportant or non-existent. The science was complicated, it was plausible to find a global warming hiatus in the data, the modelling was uncertain – with the help of a little motivated reasoning and confirmation bias, a sceptical position could be reached in good faith.

I think this is much less true now, with the warming hiatus well and truly over. What I now suspect and fear is that the promoters of and apologists for continued fossil fuel burning know well that we’re heading towards a serious mid-century climate emergency, but they are confident that, from a position of power, their sort will be able to get through the emergency. With enough money, coercive power, and access to ample fossil fuel energy, they can be confident that it will be others that suffer. Bangladesh may disappear under the floodwaters and displace millions, but rebuilding Palm Beach won’t be a problem.

We now seem to be in a world, not of peak oil, but of a continuing abundance of fossil fuels. In these circumstances, perhaps it is wrong to think that economics can solve the problem of climate change. It is a now a matter of raw power.

Is there an alternative to this bleak conclusion? For many the solution is innovation. This is indeed our best hope – but it is not sufficient simply to incant the word. Nor is the recent focus in research policy on “grand challenges” and “missions” by itself enough to provide an implementation route for the major upheaval in the way our societies are organised that a transition to zero-carbon energy entails. For that, developing new technology will certainly be important, and we’ll need to understand how to make the economics of innovation work for us, but we can’t be naive about how new technologies, economics and political power are entwined.