It’s come to this, even here. My village chippy has “teamed up” with a “craft brewery” in the next village to sell “artisanal ales” specially brewed to accompany one’s fish and chips. This prompts me to reflect – is this move from the industrial to the artisanal really a reversion to a previous, better world? I don’t think so – instead, craft beer is itself a product of modernity. It depends on capital equipment that is small scale, but dependent on high technology – on stainless steel, electrical heating and refrigeration, computer powered process control. And its ingredients aren’t locally grown and processed – the different flavours introduced by new hop varieties are the outcome of world trade. What’s going on here is not a repudiation of industrialisation, but its miniaturisation, the outcome of new technologies which erode previous economies of scale. 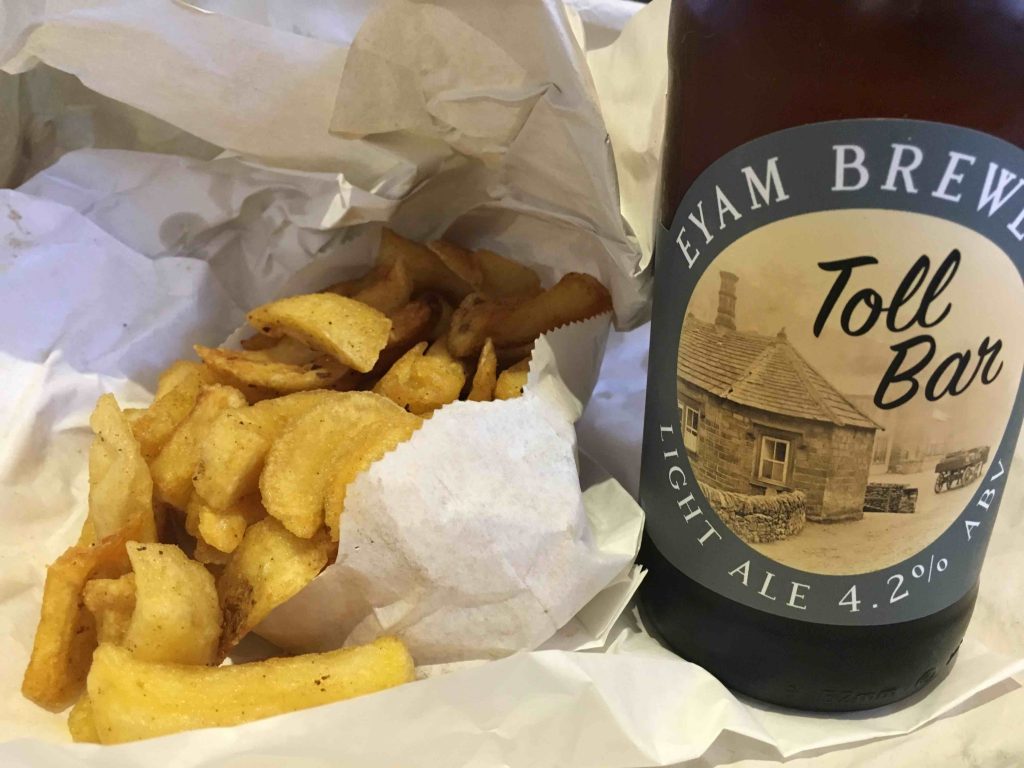 A craft beer from the Eyam Brewery, on sale at the Toll Bar Fish and Chip Shop, Stoney Middleton, Derbyshire.

Beer was one of the first industrial foodstuffs. In Britain, the domestic scale of early beer making began to be replaced by factory scale breweries in the 18th century, as soon as transport improved enough to allow the distribution of their products beyond their immediate locality. Burton-on-Trent was an early centre, whose growth was catalysed by the opening up of the Trent navigation in 1712. This allowed beer to be transported by water via Hull to London and beyond. By the late 18th century some 2000 barrels a year of Burton beer were being shipped to Baltic ports like Danzig and St Petersburg.

Like other process industries, this expansion was driven by fossil fuels. Coal from the nearby Staffordshire and Derbyshire coalfields provided process heat. The technological innovation of coking, which produced a purer carbon fuel which burnt without sulphur containing fumes, was developed as early as 1640 in Derby, so coal could be used to dry malt without introducing off-flavours (this use of coke long predated its much more famous use as a replacement for charcoal in iron production).

By late 19th century, Burton on Trent had become a world centre of beer brewing, producing more than 500 million litres a year, for distribution by the railway network throughout the country and export across the world. This was an industry that was fossil fuel powered and scientifically managed. Coal powered steam engines pumped the large volumes of liquid around, steam was used to provide controllable process heat, and most crucially the invention of refrigeration was the essential enabler of year-round brewing, allowing control of temperature in the fermentation process, by-now scientifically understood by the cadre of formally trained chemists employed by the breweries. In a pint of Marston’s Pedigree or a bottle of Worthington White Shield, what one is tasting is the outcome of the best of 19th century food industrialisation, the mass production of high quality products at affordable prices.

How much of the “craft beer revolution” is a departure from this industrial past? The difference is one of scale – steam engines are replaced by electric pumps, coal fired furnaces by heating elements, and master brewers by thermostatic control systems. Craft beer is not a return to preindustrial, artisanal age – instead it’s based on industrial techniques, miniaturised with new technology, and souped up by the products of world trade. This is a specific example of a point more generally made in Rachel Laudan’s excellent book “Cuisine and Empire” – so-called artisanal food comes after industrial food, and is in fact enabled by it.

What more general lessons can we learn from this example? The energy economy is another place where some people are talking about a transition from a system that is industrial and centralised to one that is small scale and decentralised – one might almost say “artisanal”. Should we be aiming for a new decentralised energy system – a world of windmills and solar cells and electric bikes and community energy trusts?

To some extent, I think this is possible and indeed attractive, leading to a greater sense of control and involvement by citizens in the provision of energy. But we should be under no illusions – this artisanal also has to be enabled by the industrial.

The products that such decentralised energy will depend on are the very opposite of artisanal – we’re not talking here about water-wheels crafted by the local mill-wright, but the products of some of the most sophisticated technological systems in the world. A solar cell is made of silicon, which itself is just made of sand. But in getting from sand to solar silicon, one goes through a set of processes that multiply the value of the material by four orders of magnitude – reduction with carbon to 99% pure (metallurgical) silicon, then the Siemens trichlorosilane process to produce poly-silicon, then Czochralski crystal growth to produce single crystals whose purity is expressed by the number of 9’s after the decimal point, with 99.9999% a bare minimum. Solar cells, batteries for bicycles and cars, the generators in wind-turbines, the power electronics to control it all, these are all sophisticated technological products that must be obtained through world trade.

And given that this infrastructure must be the product of industrial economies, will these local energy systems be generating enough surplus energy for export to run this industry? I don’t think so – so in addition to these local systems we will continue to need industrial scale low carbon energy sources – and in my opinion the heavy lifting here has to be done by a combination of offshore wind and nuclear.

The right questions to ask when we’re considering these questions of centralisation vs decentralisation come down to economies of scale – how do they arise, and how does the introduction of new technology change the balance of economies of scale? Failing to get this right leads to catastrophic mistakes like Mao’s “great leap forward” with its village blast furnaces – but there will be times, like craft beer, when new technology makes it possible to decentralise manufacturing and production.

The Stoney chip shop craft beer is, by the way, very good. And so are the fish and chips!

1 thought on “It’s the Industrial that enables the Artisanal”