Tom Forth and I have a new policy paper out, published by the Innovation Foundation NESTA, called The Missing £4 billion: making R&D work for the whole UK 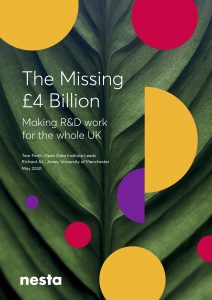 This was covered by the Financial Times, complete with celebrity endorsement: Academic cited by Cummings wants to redraw map of research spending

Here is the Executive Summary:

The Missing £4 billion: making R&D work for the whole UK

There are two economies in the UK. Much of London, South East England and the East of England has a highly productive, prosperous knowledge-based economy. But in the Midlands and the North of England, in much of South West England and in Wales and Northern Ireland, the economy lags behind our competitors in Northern Europe. Scotland sits in between. In underperforming large cities, in towns that have never recovered from deindustrialisation, in rural and coastal fringes, weak innovation systems are part of the cause of low productivity economies.

The government supports regional innovation systems through its spending on public sector research and development (R&D). This investment is needed now more than ever; we have an immediate economic crisis because of the pandemic, but the long-term problems of the UK economy – a decade of stagnation of productivity growth, which led to stagnant wages and weak government finances, and persistent regional imbalances – remain. Government investment in R&D is highly geographically imbalanced. If the government were to spend at the same intensity in the rest of the country as it does in the wider South East of England, it would spend £4 billion more. This imbalance wastes an opportunity to use public spending to ‘level up’ areas with weaker economies and achieve economic convergence.

The UK’s research base has many strengths, some truly world leading. But three main shortcomings currently inhibit it from playing its full role in economic growth. It is too small for the size of the country, it is relatively weak in translational research and industrial R&D, and it is too geographically concentrated in already prosperous parts of the country, often at a distance from where business conducts R&D.

The UK’s R&D intensity is too low

The UK’s overall R&D intensity is low. Measured as a ratio to (pre-COVID-19 crisis) gross domestic product (GDP), the Organisation for Economic Co-operation and Development (OECD) average is 2.37 per cent. The UK, at 1.66 per cent, is closer to countries like Italy and Spain than Germany or France.

The UK government has committed to matching the current OECD average by 2027, pledging an increase in public spending to £22 billion by 2025. Looking internationally shows us that substantial increases in R&D intensity are possible. Austria, Belgium, Denmark and Korea have all dramatically increased R&D intensity in recent decades. The major part of these increases is funded by the private sector, but public sector increases are almost always required alongside or in advance of this. The ratio of R&D funding from the two sources is typically 2:1, and this is a good rule of thumb for considering how increased R&D might be funded in the UK.

Looking at both the total level of spending on R&D and the ratio of public to private R&D spending is a good way to classify innovation systems within regions.
• The South East and East of England are highly research intensive with high investment by the state combined with business investment exceeding what we would expect from a 2:1 ratio.
• London and Scotland receive above-average levels of state investment but have lower- than-average levels of business investment.
• The East Midlands, the West Midlands and North West England are business-led innovation regions with business investment in R&D at or above the UK average but low levels of public investment.
• Wales, Yorkshire and the Humber, and North East England are regional economies with notably low R&D intensities in both the market and non-market-led sectors.
• South West England and Northern Ireland sit between these two groups with similarly low levels of public investment but slightly higher private sector spending on R&D.

A single sentence can summarise the extent to which the UK’s public R&D spending is centralised in just three cities. The UK regions and subregions containing London, Oxford and Cambridge account for 46 per cent of public and charitable R&D in the UK, but just 31 per cent of business R&D and 21 per cent of the population.

How the current funding system has led to inequality

The current situation is the result of a combination of deliberate policy decisions and a natural dynamic in which these small preferences combined with initial advantages are reinforced with time.

For example, of a series of major capital investments in research infrastructure between 2007 and 2014, 71 per cent was made in London, the East and South East of England, through a process criticised by the National Audit Office. The need for continuing revenue funding to support these investments lock in geographical imbalances in R&D for many years.

Imbalanced investment in R&D is, at most, only part of why the UK’s regional economic divides widened in the past and have failed to close in recent decades. But it is a factor that the government can influence. It has failed to do so. Where attempts have been made to use R&D to balance the UK’s economic strengths, they have been insufficient in scale. For example, in the 2000s the English regional development agencies allocated funding with preference to regions with weaker economies, but their total R&D spend was equivalent to just 1.6 per cent of the national R&D budget. These efforts could never have hoped to succeed. Unsurprisingly, and in contrast to vastly larger schemes in Germany, they failed.

We need to do things differently

The sums needed to rebalance R&D spending across the nation are substantial. A crude calculation shows that to level up per capita public spending on R&D across the nations and regions of the UK to the levels currently achieved in London, the South East and East England, additional spending of more than £4 billion would be needed: £1.6 billion would need to go to the North of England, £1.4 billion to the Midlands, £420 million to Wales, £580 million to South West England and £250 million to Northern Ireland. Spending in Scotland would be largely unchanged.

These numbers give a sense of the scale of the problem, but equalising per capita spending is not the only possible criterion for redistributing funding.

We want people to explore other criteria that might guide thinking on where UK public sector and charity spending on R&D is generating the most value possible. The online tool accompanying this paper models different geographical distributions of public R&D spending obtained according to the weight attached to factors such as research excellence, following business R&D spending, targeting economic convergence and investing more where the manufacturing sector is stronger.

Importantly, we do not propose that UK R&D funding is assigned purely by algorithm. We have found that the scale of current imbalances in funding and the scale by which current spending fails to meet even its own stated goal of funding excellence are widely underappreciated. Our tool aims to inform and challenge, not replace existing systems.

To spread the economic benefits of innovation across the whole of the UK, changes are needed. These will include a commitment to greater transparency on how funding decisions are made in the government’s existing research funding agencies, an openness to a broader range of views on how this might change and devolution of innovation funding at a sufficient scale to achieve a better fit with local opportunities.

For the full paper, see The Missing £4 billion: making R&D work for the whole UK.