The most sophisticated exercises in using self-assembly to make nanoscale structures and machines have used, as a constructional material, the biomolecule DNA. This field was pioneered by NYU’s Ned Seeman. DNA is not exactly stuff we’re familiar with as a constructional material, though, so I don’t suppose many people have much of a feel for some of its basic mechanical properties, like its stiffness. An elegant experiment, reported in Science at the end of last year, Rapid Chiral Assembly of Rigid DNA Building Blocks for Molecular Nanofabrication (abstract free, subscription required for full article), sheds a lot of light on this question.

The achievement of this work, reported also in this Science News article, was to devise a method of making rigid DNA tetrahedra, with edges less than 10 nm in size, at high (95%) yield (previous methods of making DNA polyhedra had much lower yields than this). A model of one of these tetrahedra is shown below. But, not satisfied with just making these tetrahedra, Russell Goodman (a graduate student in Andrew Turberfield’s group at Oxford) was able to image them with an atomic force microscope and measure the response of a tetrahedron to being compressed by the AFM tip. In this way he was able to measure the spring constant of each tetrahedron.

The spring constants he found had an average of 0.18 N/m, which is reasonable in the light of what we know about the stiffness of DNA double helices. We can use this number to estimate what the stiffness – the Young’s Modulus – of the solid that would be made if you coupled together many of these tetrahedra. The precise value will depend on how the tetrahedra are linked, but a good estimate is about 20 MPa. Compared with a covalently bonded solid, like diamond (whose modulus, at around 1000 GPa, is 50 thousand times greater than our DNA solid), it’s very much floppier. In fact, this modulus is in the range of a relatively hard rubber, of the kind a shoe sole might be made of. On the other hand, given that the material would be mostly water, it’s pretty stiff – probably about a thousand times stiffer from Jello, which is similarly made up of a network of biopolymers in water. 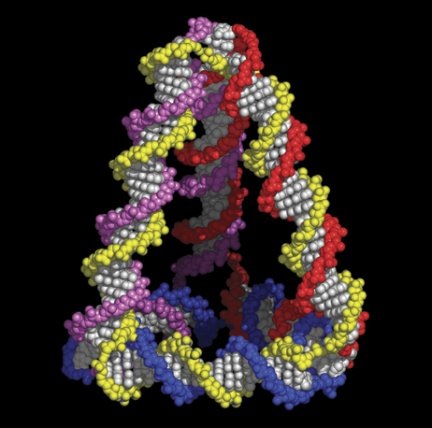 4 thoughts on “DNA as a constructional material”