The UK’s industrial strategy landscape was overturned again in the March budget, with the previous strategy (as described in the 2017 White Paper from Greg Clark, Business Minister in the May government, superseded by a Treasury document: “Build back better: our plan for growth”. Is this merely a “rebranding”, or a more substantial repudiation of the very idea of industrial strategy?

From what I can deduce, it is neither of these extremes – instead it reflects some unresolved tension inside government between two views of how industrial policy should be framed. In one view – traditionally associated with HM Treasury – the government should restrict itself to general measures that it is thought will promote productivity growth across the whole economy, resisting any measures that selectively one sector of the economy over another. This is often called “horizontal” industrial policy, in contrast to so-called “vertical” industrial strategy, in which particular sectors of the economy that are thought to be of particular importance are singled out for special support. The 2017 White Paper did signal some return to “vertical” industrial strategy, though we can see recent precursors for this going back to Mandelson’s return to the Department of Business, Innovation and Skills (as BEIS – the department for Business, Energy and Industrial Strategy was called then) in 2008, and in the continuing support for sectors such as aerospace, automotive and life sciences since then. It seems that the Treasury “Plan for Growth” marks a swing of the pendulum back towards a focus on “horizontal” industrial policy, though the signals remain somewhat mixed.

The biggest signal of a change of direction following the March budget was the abolition of the Industrial Strategy Council. This was a non-statutory body set up by BEIS to monitor and provide advice about the implementation of the Industrial Strategy, chaired by the Bank of England’s Chief Economist, Andy Haldane, and featuring a stellar array of economists and business people. The Industrial Strategy Council’s final annual report gives a great outline of what an industrial strategy should be – “a programme of supply-side policies to drive prosperity in and across the economy”, whose key ingredients should be “scale, longevity and policy co-ordination”. The regional dimensions of industrial strategy, they say, should be co-created with businesses and regional actors (as we’ve seen in the development of local industrial strategies). The report calls for the use of clear metrics to judge success by, but to look “beyond these “traditional” drivers of productivity to measures of social, human, and natural capital, as well as broader welfare impacts”. Naturally, the Industrial Strategy Council thinks it’s a good idea to have an independent – and preferably statutory – body to provide independent monitoring and advice. There’s an good summary in this FT article by Andy Haldane – UK industrial strategy is dead, long may it live.

Leaving aside the signals that winding up the Industrial Strategy Council might be sending, what’s the substance in the new Treasury document “Build back better: our plan for growth”?

I don’t find a lot to argue with in the diagnosis of the problems. The UK’s poor productivity performance since the global financial crisis is placed front and centre. A telling graph highlights the growing gap in productivity between the UK and France, Germany and the USA, while another graph (shown below) makes it clear that this isn’t just an abstract issue of economics – the stagnation of wages and living standards the UK has seen since the financial crisis closely tracks the productivity slow-down. The UK’s persistent regional disparities in productivity, about which I’ve written at length in the past, are highlighted, too, with the problem identified (correctly, in my view) as arising from “cities outside London not fully capturing the benefits of their size”. The level of analysis of the causes of these issues is somewhat more sketchy, with the Treasury ascribing the problem primarily to be persistent low investment in physical capital and skills. 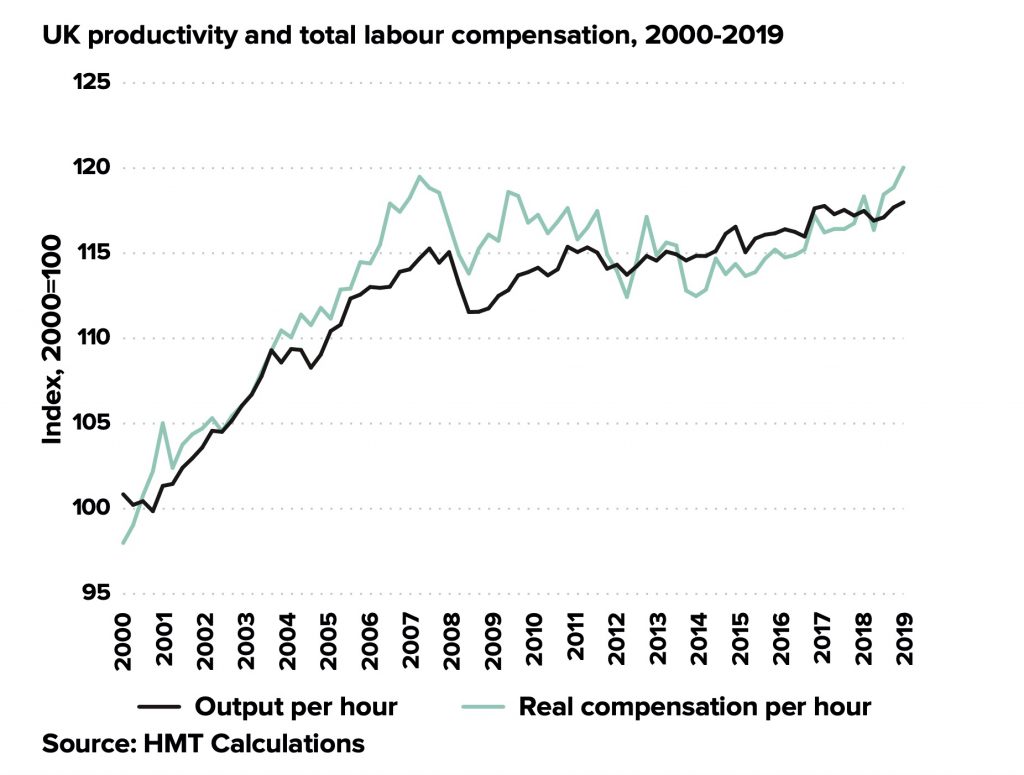 A lost decade. UK Labour productivity and real wages since 2000. From HM Treasury’s Build back better: our plan for growth. Open Government License.

The new framework for Treasury industrial strategy is built on three “pillars for growth” – infrastructure, skills and innovation. This is classical “horizontal” industrial strategy, without a focus on any particular sectors. But there are priorities – three goals, each of rather different character.

The first of these is “levelling up” – a (commendable) commitment to “ensure the benefits of growth are spread to all corners of the UK”, tackling regional disparities in health and education outcomes, supporting struggling towns, and ensuring that “every region and nation of the UK [has] at least one globally competitive city, acting as hotbeds of innovation and hubs of high value activity”. The second is the 2050 net zero greenhouse gas target, where the stress is laid on the number of “green jobs” this will produce. The third priority is the post-Brexit one of “taking advantage of the opportunities that come with our new status as a fully sovereign trading nation” – as “Global Britain”.

The plans for building on these three pillars and three priorities remain vague – some existing commitments are reasserted, such as the plan to increase public infrastructure spending, to meet an total R&D spending target of 2.4% of GDP, to deliver the FE White Paper, to introduce the new science funding agency “ARIA”, and to introduce “Freeports”. Further details are promised later, including an Innovation Strategy and the R&D Places Strategy.

The reduction of emphasis in this document on the sectors that were so prominent in the previous industrial strategy – such as aerospace, automotive, and life sciences – has clearly caused some anxiety in business circles. There’s been a response to this, in the shape of a joint letter from BEIS Secretary of State Kwarteng & Chancellor of the Exchequer Sunak. This emphasises continuity with the previous industrial strategy, asserting that the new plan “builds on the best of the Industrial Strategy from 2017 and makes the most of our strengths right across the economy”. They promise that “this government remains committed to its industrial sectors” and that the existing sector deals (e.g. for Aerospace, Automotive and Life Sciences) will be honoured. And there is the promise of more in the future – “we will follow up the plan for growth with an Innovation Strategy, as well as strategies for net zero, hydrogen and space” and “we will also develop a vision for high-growth sectors and technologies.”

There’s another indication that the words “industrial strategy” may not yet be completely unspeakable in the current government – shortly after the budget, the Ministry of Defense published their “Defense and Security Industrial Strategy”. I think this is positive – another way of creating some priorities in industrial strategy without entirely going down the sector route is for the government to focus on strategically important, long-term goals of the state, and systematically to evaluate what innovation is required and what industrial capacity needs to be built to deliver those goals.

What other goals should be pursued besides defense? The obvious two are net zero and healthcare. As a matter of urgency, the government should be developing a long-term Net Zero Industrial Strategy, to accompany a more detailed road-map for the huge job of transforming the UK’s energy economy. And as we recover from the pandemic, there needs to be a refocused Healthcare Industrial Strategy, building on the successes of the old “Life Sciences Strategy” but focusing more on population health, and learning both the positive and negative lessons from the way the UK’s health and life sciences sector responded to the pandemic. The lately departed Industrial Strategy Council produced a very helpful paper on the lessons that industrial strategy should learn from the state’s involvement in the development of the Oxford/AstraZeneca Covid-19 vaccine.

What would worry me most if I were in government is time. “Developing visions” is all well and good, but budgets are now set until 2022, and there are suggestions of funding “pauses” in some parts of the existing industrial strategy, such as the industry research and development supported by the Aerospace Technology Institute. If new programmes are to begun in 2022, they will take time to ramp up. Meanwhile other dates will be creeping up – 2027 is the date for the 2.4% R&D target, which needs the private sector to make decisions to commit substantial extra funds to business R&D in response to any increase in government R&D. And although 2050 seems far away now for the net zero greenhouse gas target, the scale of the transition and the lifetime of the assets, and the need for innovation to bring down the cost of the transition, means that the next ten years is crucial.

Not least, the latest date the government can hold an election is the end of 2024. Having repealed the Fixed Term Parliament Act, the government will probably want to use the regained flexibility to hold the election as much as a year early. There are some who say that this is a government that likes to mark its own homework. Ultimately, though, the homework will be marked by the voters. The government has raised high expectations about a return to economic growth and a levelling up of living standards, especially in the so-called “Red Wall” seats of the Midlands and the North. There’s not a lot of time to demonstrate that the country has even started on that journey, let alone made any substantial progress on it. So whatever the government has decided is the future of industrial strategy, it needs to get on with it.

2 thoughts on “What next for UK Industrial Strategy?”