The idea of an invisibility cloak – a material which would divert light undetectably around an object – captured the imagination of the media a couple of years ago. For visible light, the possibility of an invisibility cloak remains a prediction, but it graphically illustrates the potential power of a line of research initiated a few years ago by the theoretical physicist Sir John Pendry of Imperial College, London. Pendry realised that constructing structures with peculiar internal structures of conductors and dielectrics would allow one to make what are in effect new materials with very unusual optical properties. The most spectacular of these new metamaterials would have a negative refractive index. In addition to making an invisibility cloak possible one could in principle use negative refractive index metamaterials to make a perfect lens, allowing one to use ordinary light to image structures much smaller than the limit of a few hundred nanometers currently set by the wavelength of light for ordinary optical microscopy. Metamaterials have been made which operate in the microwave range of the electromagnetic spectrum. But to make an optical metamaterial one needs to be able to fabricate rather intricate structures at the nanoscale. A recent paper in Nature Materials (abstract, subscription needed for full article) describes exciting and significant progress towards this goal. The paper, whose lead author is Na Liu, a student in the group of Harald Giessen at the University of Stuttgart, describes the fabrication of an optical metamaterial. This consists of a regular, three dimensional array of horseshoe shaped, sub-micron sized pieces of gold embedded in a transparent polymer – see the electron micrograph below. This metamaterial doesn’t yet have a negative refractive index, but it shows that a similar structure could have this remarkable property. 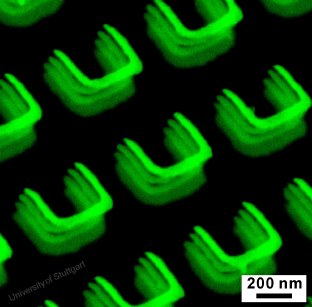 To get a feel for how these things work, it’s worth recalling what happens when light goes through an ordinary material. Light, of course, consists of electromagnetic waves, so as a light wave passes a point in space there’s a rapidly alternating electric field. So any charged particle will feel a force from this alternating field. This leads to something of a paradox – when light passes through a transparent material, like glass or a clear crystal, it seems at first that the light isn’t interacting very much with the material. But since the material is full of electrons and positive nuclei, this can’t be right – all the charged particles in the material must be being wiggled around, and as they are wiggled around they in turn must be behaving like little aerials and emitting electromagetic radiation themselves. The solution to the paradox comes when one realises that all these waves emitted by the wiggled electrons interfere with each other, and it turns out that the net effect is of a wave propagating forward in the same direction as the light thats propagating through the material, only with a somewhat different velocity. It’s the ratio of this effective velocity in the material to the velocity the wave would have in free space that defines the refractive index. Now, in a structure like the one in the picture, we have sub-micron shapes of a metal, which is an electrical conductor. When this sees the oscillating electric field due to an incident light wave, the free electrons in the metal slosh around in a collective oscillation called a plasmon mode. These plasmons generate both electric and magnetic fields, whose behaviour depends very sensitively on the size and shape of the object in which the electrons are sloshing around in (to be strictly accurate, the plasmons are restricted to the region near the surface of the object; its the geometry of the surface that matters). If you design the geometry right, you can find a frequency at which both the magnetic and electric fields generated by the motion of the electrons is out of phase with the fields in the light wave that are exciting the plasmons – this is the condition for the negative refractive index which is needed for perfect lenses and other exciting possibilities.

The metamaterial shown in the diagram has a perfectly periodic pattern, and this is what’s needed if you want a uniform plane wave arriving at the material to excite another uniform plane wave. But, in principle, you should be able to design an metamaterial that isn’t periodic to direct and concentrate the light radiation any way you like, on length scales well below the wavelength of light. Some of the possibilities this might lead to were discussed in an article in Science last year, Circuits with Light at Nanoscales: Optical Nanocircuits Inspired by Metamaterials (abstract, subscription required for full article) by Nader Engheta at the University of Pennsylvania. If we can learn how to make precisely specified, non-periodic arrays of metallic, dielectric and semiconducting shaped elements, we should be able to direct light waves where we want them to go on the nanoscale – well below light’s wavelength. This might allow us to store information, to process information in all-optical computers, to interact with electrons in structures like quantum dots, for quantum computing applications, to image structures using light down to the molecular level, and to detect individual molecules with great sensitivity. I’ve said this before, but I’m more and more convinced that this is a potential killer application for advanced nanotechnology – if one really could place atoms in arbitrary, pre-prescribed positions with nanoscale accuracy, this is what one could do with the resulting materials.