This the third and final in a series of three posts. The first part is here, and this follows on directly from part 2

(Added 2/9/2015: For those who dislike the 3-part blog format, the whole article can be downloaded as a PDF here: Innovation, research and development, and the UK’s productivity crisis).

Quantifying the productivity benefits of research and development

The UK’s productivity problem is an innovation problem. This conclusion follows from the analysis of Goodridge, Haskel and Wallis, at least if one equates the economist’s construction of total factor productivity with innovation. This needs some qualification, because when economists talk about innovation in this context they mean anything that allows one to produce more economic output with the same inputs of labour and capital. So this can result from the development of new high value products or new, better processes to make existing products. Such developments are often, but not always, the result of formal research and development.

But there are many other types of innovation. People continually work out better ways of doing things, either as a result of formal training or simply by learning from experience, they act on suggestions from users, they copy better practises from competitors, they see new technologies in action in other sectors and apply them in their own, they work out more effective ways of organising and distributing their work; all these lead to total factor productivity growth and count as innovation in this sense.

There has been a tendency to underplay the importance of formal research and development in recent thinking about innovation, particularly in the UK. This has arisen partly because the manufacturing and ICT sectors, in which R&D has always been more prominent, have declined in importance relative to service sectors. In the period up to the financial crisis, it was noticed that the UK’s productivity seemed to be growing very healthily, despite lower R&D spending than in competitor nations, which seemed to suggest that R&D had become less important for innovation than it had been before. The poor performance of the UK economy since the crisis has made the paradox of apparently strong productivity growth with weak R&D less puzzling, though.

R&D remains important, (as I argued in an earlier post “Why R&D Matters”) because it provides an organised and systematic way of bringing together teams of talented people with capital intensive equipment, to harness the new opportunities arising from the advance of science in the focused pursuit of new products and processes. R&D was itself an important social innovation, whose development was just as important in driving the second industrial revolution as the underpinning scientific discoveries in chemistry, electricity and electronics had been.

It is true, however, that it has been more difficult to apply these methodologies to the service industries, and this no doubt has contributed to the weaker productivity growth that we see in those sectors. There are high hopes that new ICT technology will change this, but it’s difficult to see evidence yet that this is showing up in the productivity statistics. I suspect that we’re still waiting for the social innovations that will allow us to fully benefit from the new technologies in services. For all the hero-worship there is of the brilliant individual inventor, the truth is that difficult and complex things are still only done by people acting collectively. Adam Smith’s division of labour is as powerful a principle for innovation as it is for the rest of the economy.

The direct contribution of R&D spending, both public and private, on productivity and economic growth has been estimated in another recent paper from Goodridge, Haskel, Hughes and Wallis (The contribution of public and private R&D to UK productivity growth). The headline results of this econometric study are that the rate of return on public sector R&D is about 20%, and that a 10% increase in public R&D spend would result in an increase of private sector total factor productivity from 1.46% to 1.49% pa. To put this in perspective, public sector R&D spending fell by 5% in real terms between 2003 and 2013. Alternatively, the increase in public sector R&D spending (currently 0.44% of GDP in the UK) that would be required to bring it up to the OECD average (0.67%) would be about 52%.

What should be done?

To take the last first, we aren’t going to be going back to the period of easy wealth from North Sea oil (of course it wasn’t easy for the engineers and workers who delivered it in dangerous conditions, but it was easy politically). This isn’t the place to discuss the pros and cons of fracking, but I can’t help feeling that the enthusiasm we see in some quarters for fracking is essentially based on nostalgia for the resource boom of North Sea oil. But leaving aside political and environment considerations, the economics of shale gas and tight oil are difficult enough in the USA with oil less than $50 a barrel, so it’s difficult to see this happening in the UK on scale to make an impact in the near future.

The biggest thing that should happen, but probably won’t, is a fundamental rethink of the way our financial services sector operates. Modern economies need strong and functional financial services sectors, to distribute capital to where it can most productively be used, to re-distribute risk according to different people’s appetites and requirements, and to match people’s needs to defer some of their consumption – i.e. to create reliable and cost-effective savings and pensions vehicles. The danger, though, is that over-strong finance sectors morph into what Acemoglu and Robinson (in their book Why Nations Fail – ) call extractive institutions, extracting rents from more productive parts of the economy by exerting their political power. The evidence isn’t overwhelming that the UK’s financial services sector has been marvellously effective at fulfilling the former set of useful functions, and parts of it have certainly been slipping in the latter direction.

There are some things that should be easy to do, because they’re conventional wisdom. More investment in public infrastructure, whether that’s fast broadband or trains and other public transport, more investment in skills, more support for innovation.

And this brings us back to R&D. If we are worried about innovation, which we should be, we need to worry about the way UK’s very weak record in R&D undermines its innovation performance more generally. My plot shows the R&D intensity of the UK’s economy over time compared to other major economies. The UK has seen a long-term decline in R&D intensity over the last few decades, and is now one of the least research intensive of the major economies. Policy makers have been aware of this for some time, but the apparently healthy pre-crash economy led to complacency that one could run an innovative economy at the technology frontier without R&D. This complacency is no longer sustainable, now the factors that kept the economy growing – oil and a bubble in the financial services industry – have gone away. Haskel’s econometric analysis makes it clear that an increase in R&D intensity towards OECD average would have a material positive effect on productivity growth. 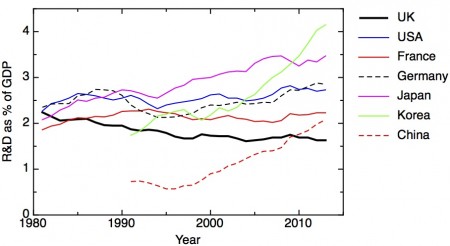 Research intensity of selected countries, expressed as gross expenditure on research and development as a percentage of GDP. Data: OECD main science and technology indicators, August 2015

The connection between public sector R&D, the overall research intensity of the economy, and productivity growth is direct. The response through the system to further reductions in public sector R&D will be rapid, which makes it difficult to understand why such a reduction is even under consideration. But reversing the situation isn’t to be done without some careful thought about how best to strengthen our overall innovation system, including business R&D both in existing companies and in fast growing start-ups, applied science and technology in support of the strategic goals of the state, and the more long-term discovery science done in universities and research institutes.

I’ve written in detail elsewhere about how we should rebuild our innovation economy. In short, we need a balance of long-term discovery science with some serious and focused efforts to develop the new technologies we know we need. I think there’s a wide consensus about what some of those needs are: to develop low carbon energy at a cost that is competitive, without subsidy, with fossil fuels, to create the healthcare technologies and social innovations that will allow us to care for an ageing population affordably. The alternative course, of continuing on our current path of stagnating productivity and stagnating innovation isn’t inevitable. It would be a choice, and it’s a choice we shouldn’t make.

5 thoughts on “Innovation, research, and the UK’s productivity crisis – part 3”