How does the UK compare with other leading research intensive economies, and how has its relative position changed in recent years? The graph above is an attempt to answer both questions graphically, separating out the contributions of both the public sector and the private sector to the overall R&D intensity of the economy as a proportion of GDP, and illustrating the trajectories of this expenditure since 2008. The UK stands out as having begun the period with a weak R&D performance, and since then it has gone in the wrong direction. 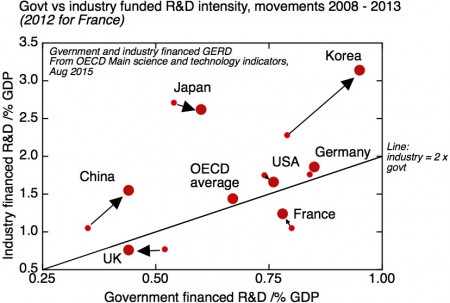 We can see some different trajectories in recent years. China and Korea stand out by their large increases in both private sector and public sector R&D intensity. This takes Korea comfortably to the status of the most R&D intensive large economy in the world, while China has moved rapidly from a lower base to overtake the UK. The large developed economies of USA, Germany and France main relatively stable in their R&D efforts, while Japan has seen a rather small shift from its position of relatively very high private sector R&D.

In the UK though, we see a substantial decrease in public sector R&D intensity, with private sector R&D intensity remaining stable but low. In real terms, UK government expenditure on science, engineering and technology is now lower than it was in 2002.

Within the overall relatively static industrial R&D figure there are significant sectoral movements. The largest sector remains pharmaceuticals, but here R&D fell in real terms by 15%, while in aerospace, another historically strong sector for UK R&D, there was a 9% fall. R&D in the Computer programming and information services sector rose by 24%, while the most dramatic change was seen in automotive. Here R&D expenditure rose by 60%. This is part of a larger story of the revival of the UK automotive industry; there’s a positive message here, that with the right circumstances and policies, the UK is in a position to revive R&D capacity relatively quickly.

The Science Minister has responded to criticisms of the low R&D intensity of the UK economy by pointing out that just counting how much one spends – the input measures – doesn’t tell you about what you get out of the system. This is a fair point, and it’s usual here to quote as output measures the undoubtedly impressive statistics of the high proportion of world citations to scientific papers achieved by UK science. But the real output measures should be the ones that apply to the economy and society – is innovation generating higher living standards? Are we making enough progress to making our energy economy more sustainable? I don’t think so.

The UK is a country which would like to think of itself as being on the technological frontier; it faces problems of stagnant productivity, and a trade position which is currently in a peacetime record deficit. We’re in a world which needs to decarbonise its energy supply and deal with problems like climate change and a rapidly ageing population. These don’t seem like a good set of circumstances in which to reduce its R&D further.

(1) A recent report commissioned for the Department of Innovation and Skills (What is the relationship between public and private investment in R&D?) reviews the evidence in more detail and derives an estimate for the marginal response of private sector R&D to public sector R&D.

1 thought on “The wrong direction”