A week ago I gave a talk with this title at a conference organised by the Smart Specialisation Hub. This organisation was set up to help regional authorities in developing their economic plans; given the importance of local industrial strategies in the government’s overall industrial strategy its role becomes all the more important.

Other speakers at the conference represented central government, the UK’s innovation agency InnovateUK, and the Smart Specialisation Hub itself. Representing no-one but myself, I was able to be more provocative in my own talk, which you can download here (PDF, 4.7 MB).

My talk had four sections. Opening with the economic background, I argued that the UK’s stagnation in productivity growth and regional economic inequality has broken our political settlement. Looking at what’s going on in Westminster at the moment, I don’t think this is an exaggeration.

I went on to discuss the implications of the 2.4% R&D target – it’s not ambitious by developed world standards, but will be a stretch from our current position, as I discussed in an earlier blogpost: Reaching the 2.4% R&D intensity target.

Moving on to the regional aspects of research and innovation policy, I argued (as I did in this blog post: Making UK Research and Innovation work for the whole UK) that the UK’s regional concentration of R&D (especially public sector) is extreme and must be corrected. To illustrate this point, I used this version of Tom Forth’s plot splitting out the relative contributions of public and private sector to R&D regionally. 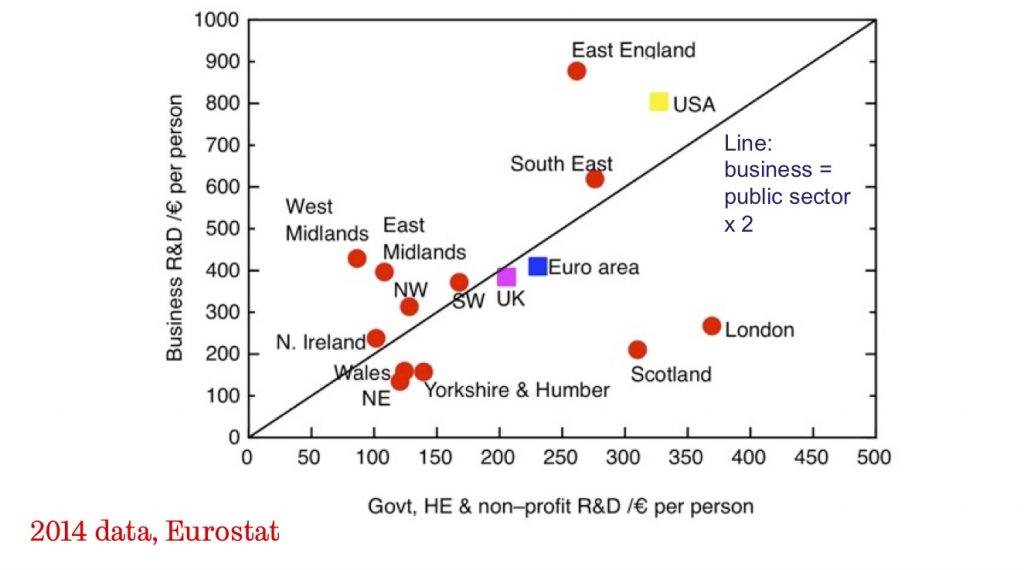 I argued that this plot gives a helpful framework for thinking about the different policy interventions needed in different parts of the country. I summarised this in this quadrant diagram [1].

Finally, I discussed the University of Sheffield’s Advanced Manufacturing Research Centre as an example of the kind of initiative that can help regenerate the economy of a de-industrialised area. Here a focus on translational research & skills at all levels both drives inward investment by international firms at the technology frontier & helps the existing business base upgrade.

I set this story in the context of Shih and Pisano’s notion of the “industrial commons” [2] – a set of resources that supports the collective knowledge, much of it tacit, that drives innovations in products and processes in a successful cluster. A successful industrial commons is rooted in a combination of large anchor companies & institutions, networks of supplying companies, R&D facilities, informal knowledge networks and formal institutions for training and skills. I argue that a focus of regional economic policy should be a conscious attempt to rebuild the “industrial commons” in an industrial sector which allows the opportunities of new technology to be embraced, yet which works with grain of the existing industry and institutional base. The “smart specialisation” framework is a good framework for identifying the right places to look.

1. As a participant later remarked, I’ve omitted the South East from this diagram – it should be in the bottom right quadrant, albeit with less business R&D than East Anglia, though with the benefits more widely spread.