The UK was the country in which mass production of steel began, so the current difficulties of the UK’s steel industry are highly politically charged. For many, it is unthinkable that a country with pretensions to be an economic power could lose its capacity to mass produce steel. To others, though, the steel industry is the epitome of the old heavy industry that has been superseded by the new, weightless economy of services, now supercharged by new digital technologies; we should not mourn its inevitable passing. So, is steel irrelevant, in our new, dematerialised economy? Here are two graphs which, on the face of it, seem to tell contradictory stories about the importance, or otherwise, of steel in modern economies. 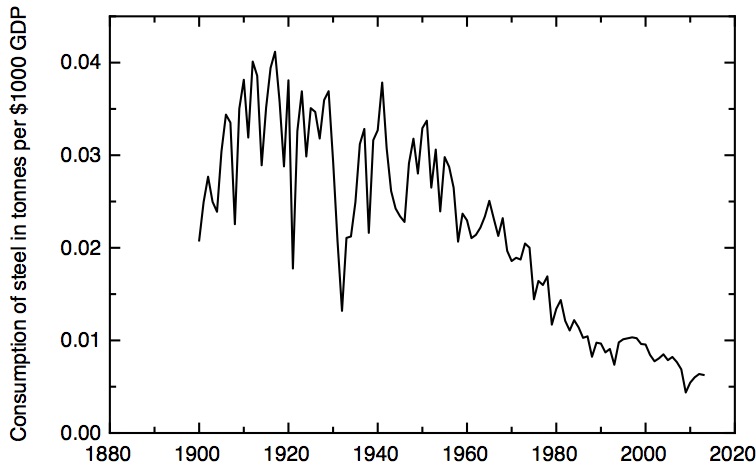 The “steel intensity” of the economy of the USA – the amount of steel required to produce unit real GDP output (expressed as 1000’s of 2009 US dollars).

The first graph shows, for the example of the USA, the steel intensity of the economy, defined as the amount of steel required to produce unit GDP output.

This rose to a plateau in the first half of the twentieth century (with some major fluctuations reflecting the economic turbulence of the 1920’s and 1930’s). The second half of the century, though, shows a fairly continuous decline in the amount of steel required to produced a unit of GDP – a graphic illustration of relative dematerialisation of the US economy. 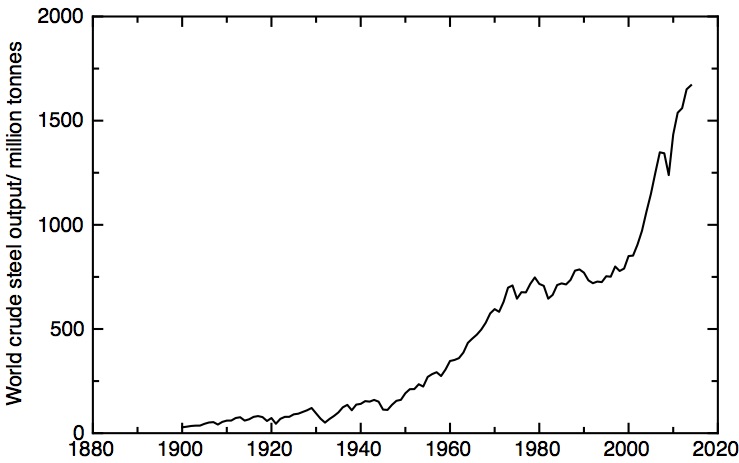 But I could tell a different story with the second graph, which shows the total world output of steel. This certainly doesn’t look like dematerialisation – on the contrary, it shows a relentless increase in the use of steel. A closer look shows two periods of particularly strong growth – between 1950 and 1980, and from 2000 to the present day, with a couple of decades of weaker growth separating them.

To understand what’s going on here, we need to ask ourselves what we use steel for. As summarised in Allwood and Cullen’s excellent book Sustainable materials with both eyes open, the dominant uses for steel now are in construction and infrastructure. 42% of steel output goes into buildings, the biggest fraction of which (44%) is in the form of rebar, and 14% in other infrastructure (again, mostly as rebar, but including some 6% as train tracks). Steel, then, is the fundamental raw material of urbanisation.

We can now understand the two periods of fast growth of steel output, in broad terms, as corresponding to two great waves of urbanisation – the first, between 1950 and 1980, in the USA and Europe, and the second, from 2000 and still continuing, as the rapid urbanisation of China. 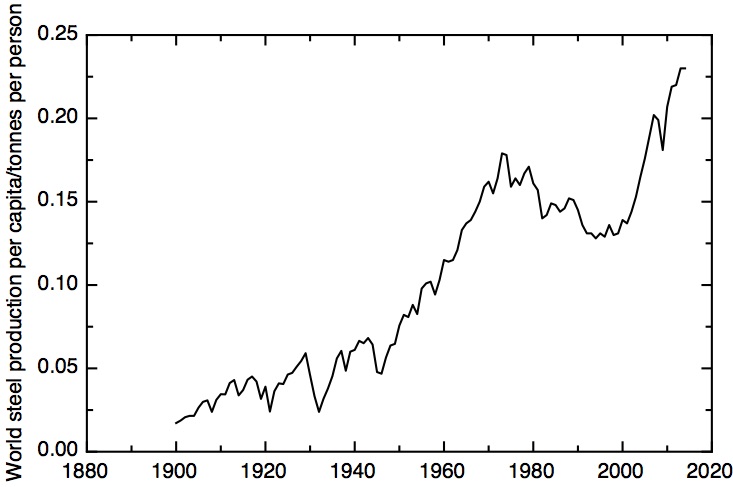 Where does dematerialisation come into this? Replotting world steel output normalised by population, in my third graph, goes some way to reconciling the two perspectives. Here we see that from about 1970 to 2000 there was indeed a decline in steel production per capita, despite continuing rising world GDP. There are two things going on here.

Firstly, we need to distinguish between stocks and flows – to build out an infrastructure of cities, with roads, commercial and industrial buildings, train tracks and so on – needs a continuous input of steel at a rate proportional to the rate of urbanisation. But once one’s urban infrastructure is essentially complete, corresponding to a certain fixed stock of steel embedded in that infrastructure, one then needs a smaller flow of steel as input to maintain and renew it.

Secondly, as technology improves, one can achieve the same or a greater degree of functionality from a smaller amount of steel, or one can replace steel by other materials, like aluminium alloys or plastics, which may be cheaper, or lighter, or both. For example, 12% of world steel output is used in cars, trucks and ships. Better technology and materials substitution allow us to make lighter cars using less steel – for example, between 1975 and 1981 the average weight of a US car fell from 4060 lbs to 3202 lbs. But this process doesn’t always go in one direction – by 2004 the average US car had grown again to 4000 lbs. This is an illustration of the material analogy of Jevons’ paradox. As we learn to make and use materials more efficiently, we still end up using more of them in total; our appetite for more, bigger and better stuff in total outweighs the economies we can make on individual products.

So we can resolve the paradox by noting that steel is more important than ever as the foundation of our industrialised, urban economies. But more than a century of remarkable (and widely unappreciated) technological progress means that it is relatively less important in terms of its contribution to GDP, because we’ve learnt to make it so much more cheaply and efficiently. For example, the basic oxygen converter, introduced after the second world war, resulted in one-thousand-fold increases in labour productivity, according to figures cited by Vaclav Smil, while the continuous casting process has led to significant reductions in energy intensity.

It’s interesting that this material, on which our urban civilisation is founded, isn’t at all new. Smiths in antiquity knew how to make this remarkable and versatile alloy, in which half a percent or so of carbon transforms the properties of iron. Scientific and technological progress has led to better fundamental understanding of the material, and that’s led to the development of many different types of steel, with different combinations of key properties like workability, strength and hardness. But the transformational impact of technology hasn’t been in the development of fundamentally new materials, it’s been the development of new processes to make more or less the same material at huge scale and low price. It’s worth remembering that, as we get excited about new materials like carbon nanotubes and graphene. Old materials like steel can be very persistent, if they’re cheap, available in quantity, and good enough.