On April 1st this year, the average UK household will see its annual energy bills rise from £1,277 to around £2,000 a year, according to the Resolution Foundation. After 10 years of stagnant wages – this itself a result of the ongoing productivity growth slowdown, there’s a clamour for some kind of short term fix for a potential political crisis, made worse by a forthcoming tax rise. Even more ominously, an unfolding geopolitical crisis over a conflict between Russia and Ukraine may interact with this energy crisis in a potentially far-reaching way, as we shall see. 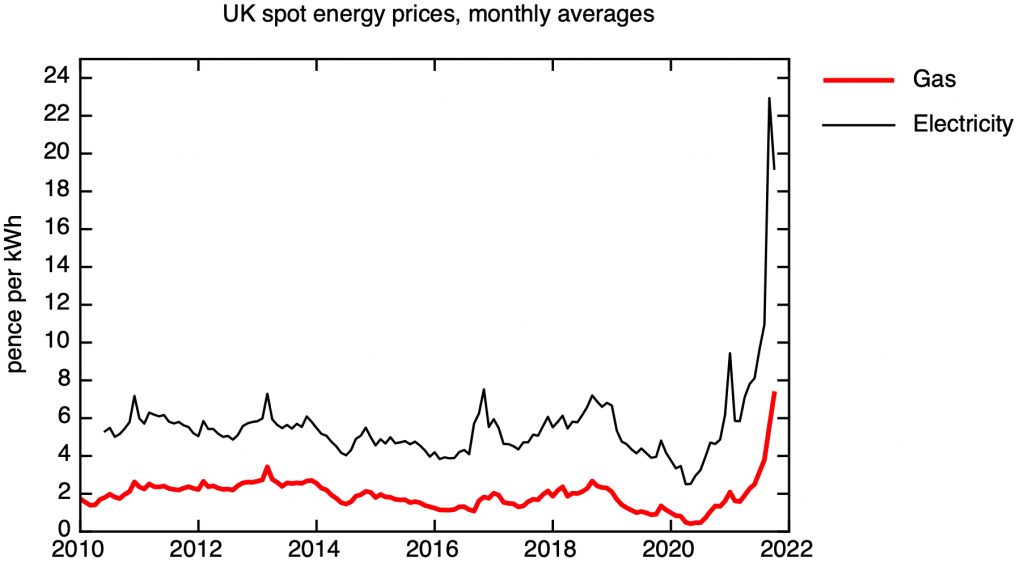 My first plot shows the scale of the crisis. This shows the wholesale, spot prices of gas and electricity since 2010. I don’t want to dwell here on the dysfunctional features of the UK’s retail energy market that have led to the failure of a number of suppliers, or to look at the short-term issues that have exacerbated a current supply squeeze. Instead, it’s worth looking at the longer term implications for the UK’s energy security of this episode of market disruption, and to try to understand how we have been led to this state by global changes in energy markets and UK policy decisions over decades.

Natural gas matters existentially for the UK’s economy, because 40% of the UK’s demand for energy is met by gas, and without sufficient supplies of energy, a modern economy and society cannot function. The price of electricity is strongly coupled to the price of gas, because 34% of our electricity (in 2020) was generated in gas-fired power stations, compared to 15% from nuclear and 23% wind. But generating electricity only accounts for 29% of our total demand for gas. The biggest fraction – 37% – is used for heating our houses, with another 12% is directly burnt in industry, to make fertiliser, cement and in many other processes.

To understand why the wholesale price of gas matters so much, we need to understand a couple of ways in which the UK’s energy landscape has changed in the last twenty years. The first – the UK’s own balance between production and consumption – is shown in the next plot. Since 2004, the UK has gone from being self-sufficient in gas to being a substantial importer. Production of North Sea gas – like North Sea oil – peaked in the early 2000s, and has since rapidly dropped off, as the gas fields most easily and cheaply exploited have been exhausted.

The second consideration is the nature of the international gas market. A few decades ago, natural gas was a commodity that was used close to where it was produced – it could not be traded globally. But since then an infrastructure has been developed to transport natural gas over long distances; a network of intercontinental pipelines have been built, so gas produced, for example, in Arctic Siberia can be transported to markets in Western Europe. And the technology for shipping liquified natural gas in bulk has been developed, allowing gas from the huge fields in Qatar and Australia, and from the USA’s shale gas industry, to be taken to terminals across the world. This means that a worldwide gas market has been developed, tending to equalise prices across the world. A liquified natural gas tanker can leave Qatar, the USA or Australia and choose to take its cargo to wherever the price it can fetch is highest.

The combination of the UK’s dependency on gas imports means that the prices UK households and industry have to pay for energy reflect supply and demand on a global scale. My next plot shows how global demand has changed over the last couple of decades. The UK’s demand has held steady – the UK’s “dash for gas” represented an early energy transition from extensive use of coal to natural gas. This was a positive change that has reduced the UK’s emissions of greenhouse gases. Now other countries are following in the UK’s footsteps – again, a positive development for overall world greenhouse gas emissions, but putting huge upward pressure on gas supplies. This stresses that the UK is a minor player in world gas markets; its consumption accounts for about 2% of world demand.

World gas consumption by continent, together with China and UK. Data: US Energy Information Administration

Where is this gas coming from? The largest net exporter, as shown in my next plot, is Russia. There’s an ominous echo of the 1970’s and its linked energy, economic and political crises, as dominant energy suppliers realise that withholding energy exports can be a powerful weapon in geopolitical conflicts. As it happens, the UK’s gas imports come primarily from Norway, by pipeline, and Qatar, through LNG imports by ship. But this doesn’t mean that the UK won’t be affected if Russia chooses to exert pressure on Europe by throttling back gas exports. There’s a global market – if Russia cuts off supplies to Germany and Central Europe, Germany will seek to replace that by buying gas from Norway and on the world LNG market, and the prices the UK has to pay will rocket. 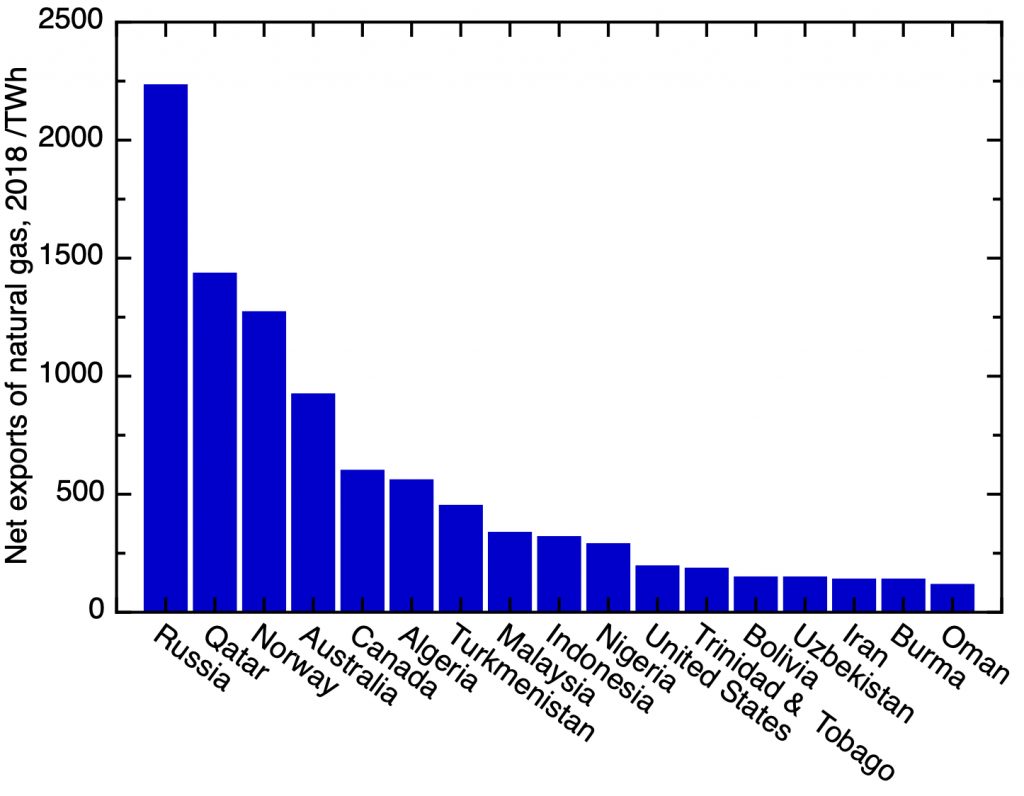 What should the UK do about this energy crisis?

We can discount straight away the suggestion made by veteran Thatcherite and Eurosceptic MP, Sir John Redwood, that the UK should simply produce more gas of its own. The UK is a small-scale participant in a global market. Even doubling its gas production would make no impact on the global balance of supply and demand, so prices would be unaffected. It’s true that if the gas was produced by a government-owned organisation, the rent – the difference between the market price and cost of production – would be captured by the UK state rather than having to be handed over to the governments of major exporters like Qatar, Norway and Russia. But British Gas was privatised in 1986.

The reason the UK ran down its production was that governments in the 1980’s made a conscious decision that energy should be left to the market, and the market said that it was cheaper to import gas than to produce it from the North Sea (and even more so than to develop a fracking industry in Sussex and the rural Pennines). One can’t help getting the impression that UK politicians like John Redwood are in revolt against the consequences of the national economic settlement that they themselves created.

In fact, there is nothing fundamental the UK can do now apart from strengthen the social safety net for the poorest households, accepting the pressure to increase taxes this leads to. Less politically visible, but nonetheless important, is the pressure high gas costs will put on energy-using industries. The reality is that, as a net importer of energy, higher gas prices inevitably lead to a real loss of national income. Energy infrastructures take many years to build, so all we can do now is look back at the things the UK should have done a decade ago, and learn from those mistakes so that we are in a better position a decade on from now.

What the UK should have done is to reduce the demand for gas through an aggressive pursuit of energy efficiency measures, and to increase the diversity of its energy sources by accelerating the development of other forms of (low-carbon) electricity generation. It failed on both fronts.

In 2013, the Coalition government reduced spending on energy efficiency measures as part of a campaign to “cut the green crap”; the result was a precipitous drop in measures such as cavity wall insulation and loft insulation. In 2015, the zero-carbon homes standard was scrapped, with the result that new housing was built to lower standards of energy efficiency. Recall that 37% of the UK’s gas demand is for domestic heating, so the UK’s poor standards of home energy efficiency translate directly into increased demand – and, with the current high prices, higher bills for consumers. “Cutting the green crap” turned out to be a costly mistake.

It is true that the UK has brought on-stream a significant amount of offshore wind capacity. However, too much of this capacity has been offset by the decline of the UK’s existing nuclear fleet, now approaching the end of its life. The UK government has committed to a programme of nuclear new build, but this programme has stalled. In 2013, I wrote that the nuclear new build programme was “too expensive, too late”, and everything that has happened since has born that diagnosis out.

There’s a more general lesson to learn from the current gas price spike. For some decades, the fundamental underpinning of the UK’s energy policy is that the market should be left to find the cheapest way of delivering the energy the nation needs. In the last decade, the government has intervened extensively in that market to promote one policy objective or another. We’ve seen contracts for difference, capacity markets, renewable obligation certificates – the purity of a free market has long since been left behind. But there’s still an underlying assumption that someone will be running a spreadsheet to calculate a net present value for any new energy investment.

Cost discipline does matter, but it’s important to recognise that these calculations, for investments that will be generating income for multiple decades, rest on projections of market conditions running many years in the future. But what this current episode should tell us is that the future course of energy markets is beset by what the economists call “Knightian uncertainty”. On the reliability of predictions of future energy prices, the lesson of the past, reinforced by what’s happening to gas prices now, is that no-one knows anything.

Energy can’t be left to the market, because the future state of the market is unknowable – but the need for energy is an inescapable ingredient of a modern economy and society. For something that is so important, building resilience into the system may be more important than maximising some notional net present value whose calculation depends on guesses about the state of the world over decades. This is even more true when we factor in the externalities imposed by the effect of fossil fuels on climate change, whose cost and impact remains so uncertain. To be more positive, there are uncertainties on the upside – the reductions in cost that an aggressive programme of low carbon research, development and deployment-driven innovation could bring. Rather than relying entirely on market forces, we have to design a resilient zero carbon energy system and get on with building it out.

1 thought on “Lessons from the gas price spike”